With the next test, using Sanyo Ni-MH 2500's, I put the matching pairs of cells in CH1 and CH3, instead of CH1 and CH2 as I normally do. We know that CH1 and CH3 should be matched more closely. The terminal voltages were also better matched. The following chart proves to be rather interesting on several counts, but first the chart:- 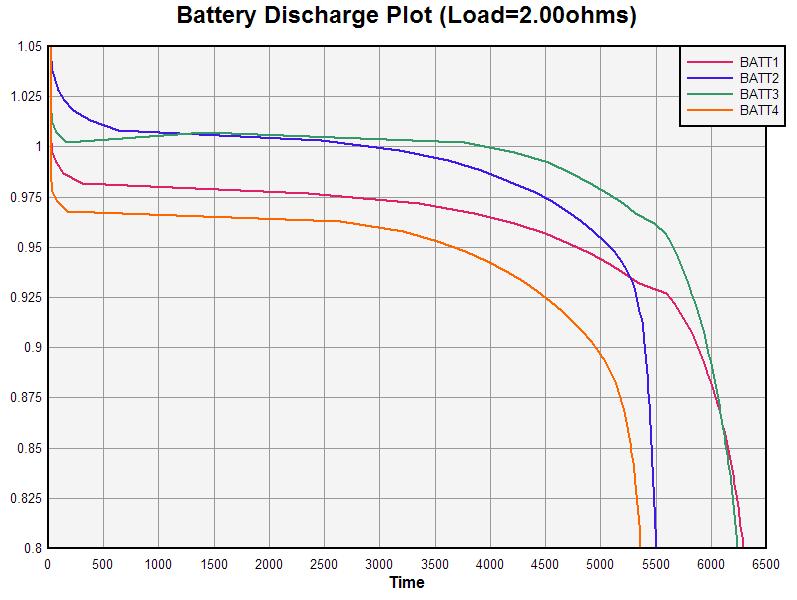 We see that CH1 and CH3 terminates nearly at the same time but the discharge profile is a little different. In fact, on CH3, you can see that the voltage actually rises for a while before declining. This is very odd and cannot be explained through battery chemistry changes. Since it only occurs on one channel and not the others, it cannot be attributed to sampling cycle issues either. I'm still puzzling over this one.

It may be that our sampling isn't all that far off. What we need now are matched batteries with same starting capacities. Nevertheless, it does look like battery chemistry does impact discharge profiles somewhat.

Okay, I got the batteries tested with the MAHA C-9000 analyzer and that reported the following:-

The same batteries were put through the existing test setup and the following graph was the result:- 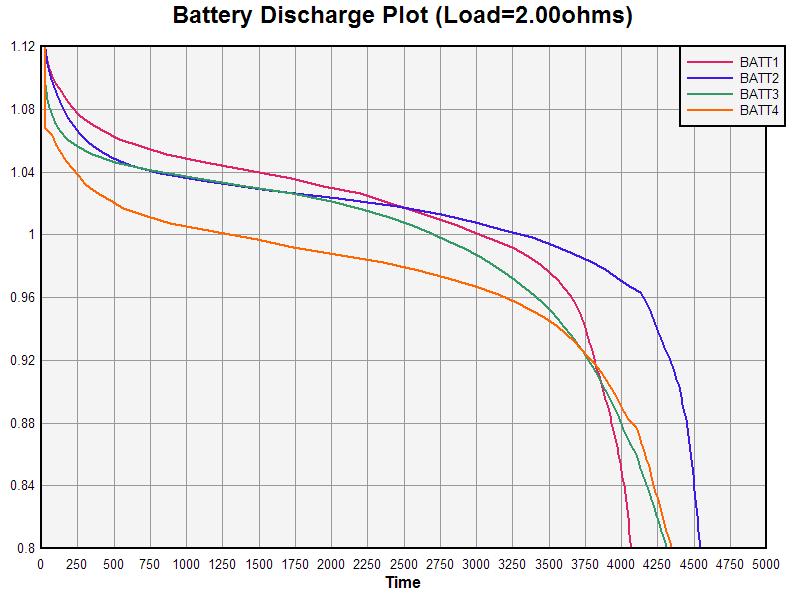 There seems to be some agreement with the results in general although our load estimation is probably way off at this point. Assuming a 1ohm load, our readings are:-

We really need to sort out the PWM load business.

Yet another test - this time with the Sanyo-NiMH-2700 cells, which was analyzed by the MH C-9000 to have the following capacitites:- 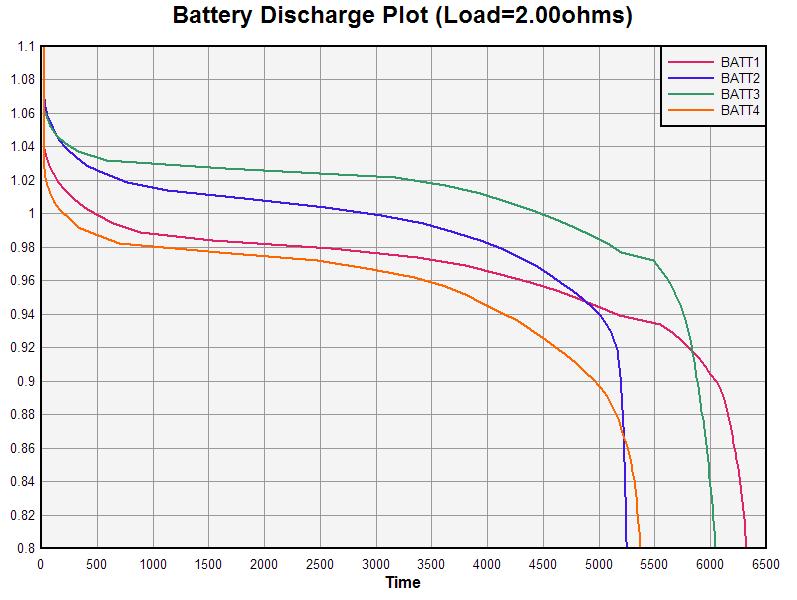 The chart seems to match the analyzer results but there still seems to be a greater voltage drop on channel-1. This could well be due to the cell itself though.

Right, in this next test, we revert to PWM-duty-cycle derived load calculations instead of depending on what the DMM read for us. Previously, the results didn't reflect what the DMM was reporting and we expect the duty-cycle approach to be more accurate. This was done using the same GP1600 batteries that were charged since the last test. The charger reported the following charge capacities:-

The result of the test is as follows:- 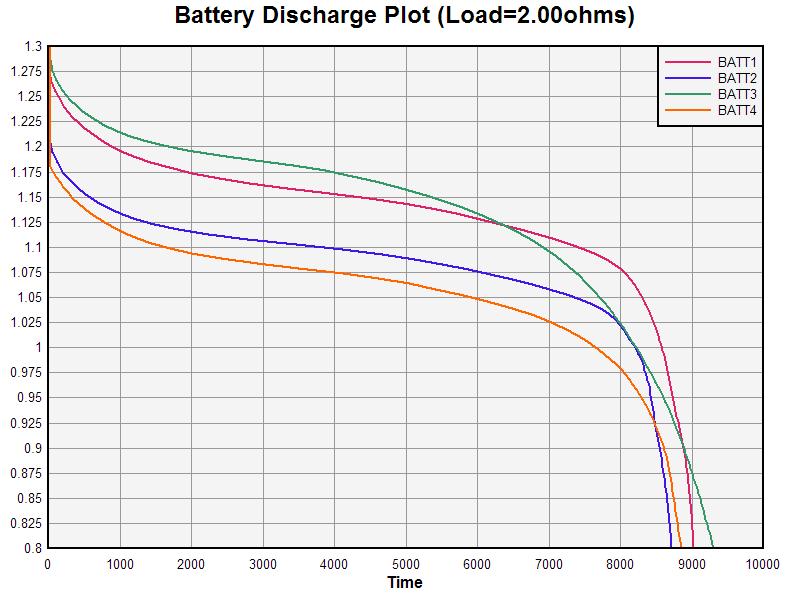 As you can see, the cells in this test are much better behaved, probably due to the correct lower load now and so it didn't cause strange cell chemistry. BATT1 and BATT3 did start with higher terminal voltages. The software reported the following tested capacities:-

It should be noted that I terminated a start after a few minutes to make some changes so I probably lost about 2mAh to 4mAh there. These results are a little odd though, not tracking the amount of charge it took but broadly following the trend. BATT3 still has the highest reported capacity, and BATT4 the lowest. BATT1 is pretty close but BATT2 is off.

At the same time, I've made some code changes to stabilize operations and to make the LCD display more useful. We may have to re-measure the load resistors again, and perhaps find a way to measure it more precisely.

With more testing done using the duty-cycle based load computation, it's starting to look like we're on the right track. We tested the Sanyo2500's out of the charger this time. The starting capacities as reported by the charge intake were:-

For this particular test, I put BATT1 and BATT3 in channels 2 and 4 respectively in order to see if there are systemic errors from these channels since it looked like BATT1 and BATT3 always came out on top. So, in the interpretation of the chart, bear this in mind. 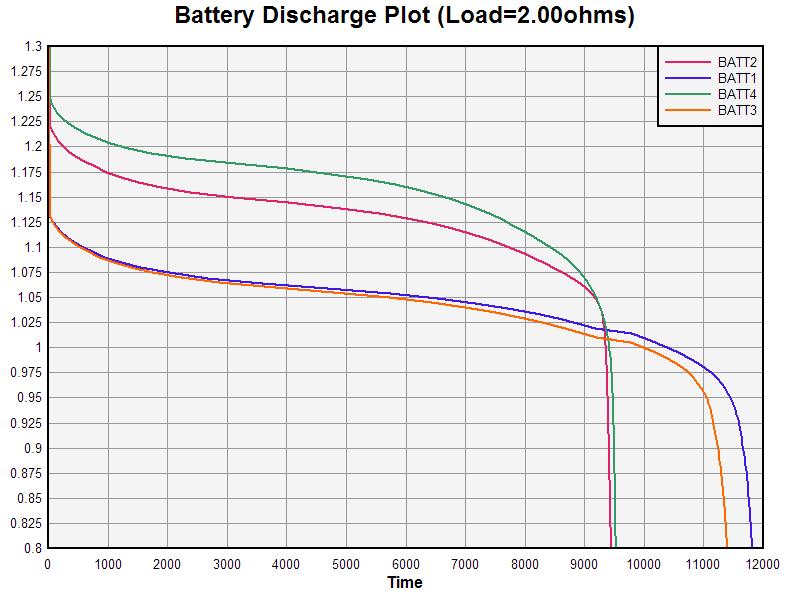 Note how BATT1 and BATT3 still comes out on top, reflecting the higher initial charge. There appears to be a strange "kink" around the 9700-second mark on the discharge curves of BATT1 and BATT3 and this could be due to channel crosstalk as BATT2 and BATT4 both end their test and the voltage on their channels rise suddenly.

The reported capacities are as follows:_

The trends agree although the actual capacities don't. It is important to remember that charge capacity may not equate to the charge intake as there will be inefficiencies. In this case, the results actually agree with the earlier analyzer profile of the cells, which was:-

At this point, we need to deal with four issues:-

1. The voltage reading spike when LCD backlight comes on during the start of the test
2. Channel crosstalk
3. Why terminal voltages on channels-2 and -4 always seems lower?
4. Why we lost data on CH1 and CH2 after the data dump?

In the fourth case, removing a battery from the holder will result in the channel turning off, and if so - no further readings were given since there is no reference battery. I suppose we could live with this scheme although it is easy enough to change. At least this isn't due to a code glitch or stack overflow.

Also, preliminary tests on the ADC's show that they are all reading within <0.001V error. Re-measurement of the load resistor yielded a new set of results though:-

As for the first issue, it turned out to be a simple problem - I was setting the current limit on the power supply too low so that whenever the LCD backlight came on, it was pulling down the supply voltage enough to cause a voltage sag on the 3.3V supply, which resulted in an apparent voltage rise for the ADC. Sometimes the simplest oversight can create puzzling effects.

Back to the GP1600 batteries. The charge they took were:-

The problem with the voltage rise with LCD backlight is completely resolved. It looks like there might still be some crosstalk but it is not so evident in this test. The results are as follows:- 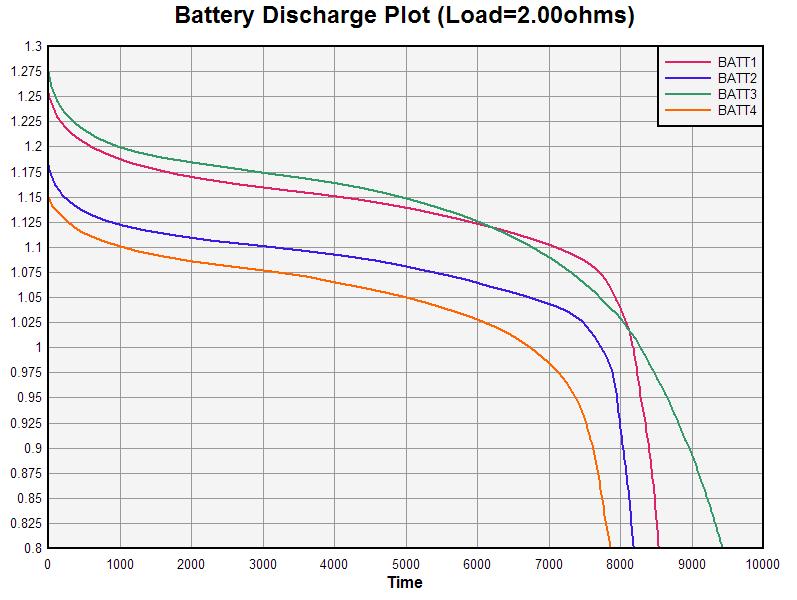 As you can see, the curve is very well behaved with BATT1 showing it's characteristic sharper knee. The reported capacities are:-

Notice that BATT3 took a lot more charge due to the fault and this is being reflected in the reported capacity. Other than that, the whole thing is pretty well-behaved now. Just need to verify the reported capacities. We're almost done with the hardware and software design. Once done, we can get on with testing of cells.

We're testing the GP1600's again, this time charged through the Re-Cycko charger and put into the holders in the reverse order. 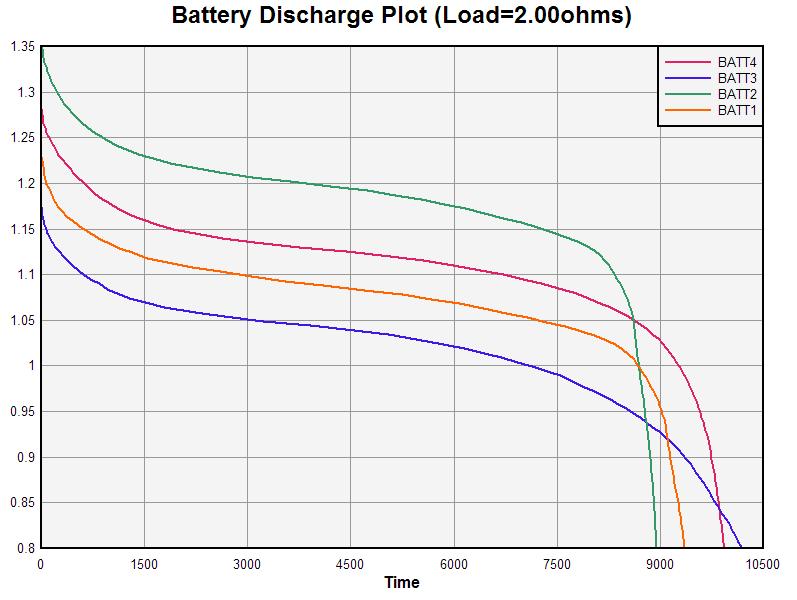 The reported capacities are as follows:-

Notice that now batteries 2 and 4 seem to be showing higher capacities. This suggests that the channels 2 and 4 readings might be biased or that the charger put in different charges. This test needs to be repeated. We will have to measure the MOSFET's Rds to see if it is having an impact here as well.

*update: Tests with the DMM is showing a full on Rds of (ohms) 1.26, 1.26, 1.25, 1.26, 1.26 respectively. This means that the Rds is behaving quite consistently - certainly not enough to account for the problems we are seeing thus far with the lower voltages. We are going to use these new measurements for the duty-cycle calculations but at these resistances, the quality of the connection can make a bit difference. Our earlier computations did not take the Rds into account and this could mean that earlier capacities are over optimistic. It is, however, possible that the Rds gets lower with higher bias voltages but the characteristic graphs so far suggest that it tracks more or less linearly.

We re-did the test with our modified resistive load coefficients and as expected, the reported capacities are lower. 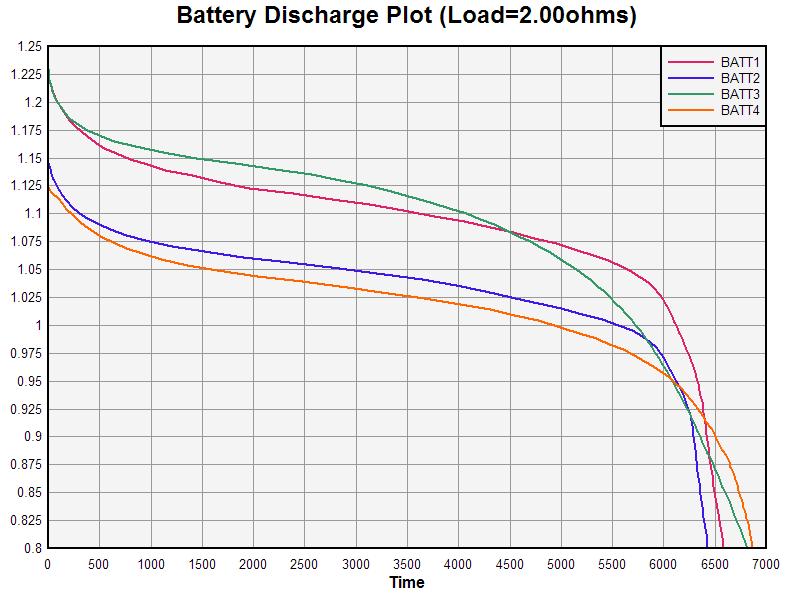 Well, it appears that cells 1 and 3 have now re-gained their improved performance. This looks suspiciously like the result of un-matched channels. I will repeat this test again to confirm this.

This seems to match quite well with our test results:- 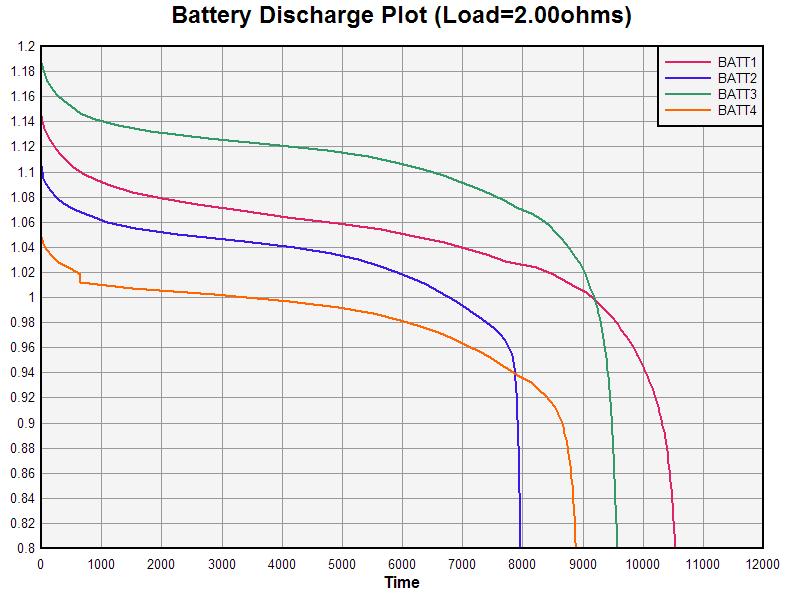 There was some computational oversight in the code which resulted in higher than expected results. The numbers in brackets show what the correct calculations should have been. Those numbers seem somewhat lower than the analyzer reported so we may have to re-check what the Rds+load resistance is. In general, however, there is agreement in terms of the ranking of the cell capacities. The "kink" in the channel-4 curve near the start was probably due to my trying to adjust the seating of the battery after the test started.