I have tweaked the VFD I2C routines as best as I can and they're still too slow for a real-time full-screen update. It looks like I'm going to have to find a faster type of display.

In the meantime, the weather has turned wet and it was rather chilly two nights ago, which left me wondering exactly how cold it became (cold is relative of course). In any case, I decided to whip together a quick test of the VFD capabilities and stuck a temperature sensor and LDR onto the test board. The LDR is used to detect ambient light so that I can reduce the VFD brightness when it becomes dark. After a couple of hours of coding, I have a pretty accurate temperature logging system which prints out a graph over a period of time that I can designate. The graph will autoscale and the minimum and maximum temperatures are also recorded. 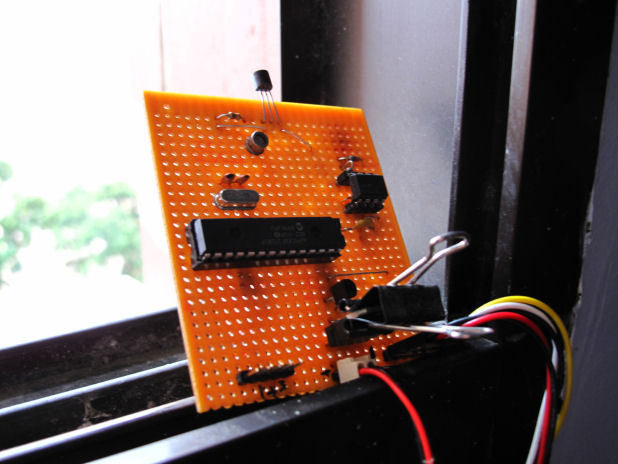 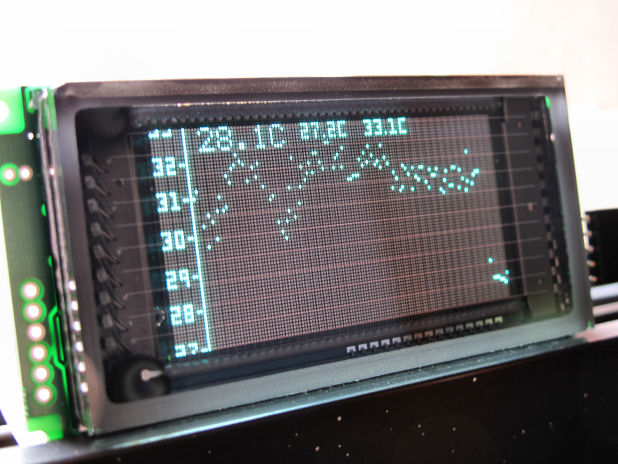 In the photo, you can see about 4-hours worth of temperature data, recorded once every 2-minutes which explains the data distribution. In fact, temperature changes a whole lot more than I expected. It's a lot nicer if I used a 10-second or 1-second period though, as you can see the dynamic changes as windows and doors are opened/closed, or as various environmental changes takes place (wind, light, etc.)

VFD's are really nice and pretty (and expensive) but they draw a lot of power (probably over 350mA) and so the 5V regulator I am using gets pretty hot when run off the 12V wall-wart. For a proper portable temperature logger, you'd want to use LCD instead since that only draws a fraction of the power. In fact, I should hunt around to see if I can find a suitable one.

This looks like a pretty fun toy now, but it isn't the audio FFT analyzer that I originally envisioned.

I had to add a heatsink on the 7805 regulator when running off the 12V wall-wart because it was overheating and experiencing thermal shutdown, which corrupted the data. The sensor was also moved off the board on a 6-inch tether to provide better thermal isolation. The nett effect of the latest modification are a much more accurate readout, and stable temperatures. I've been staring at the display for many nights now, being quite fascinated at the way the temperature varies.