This thread is for DragonLink connection instructions and such. 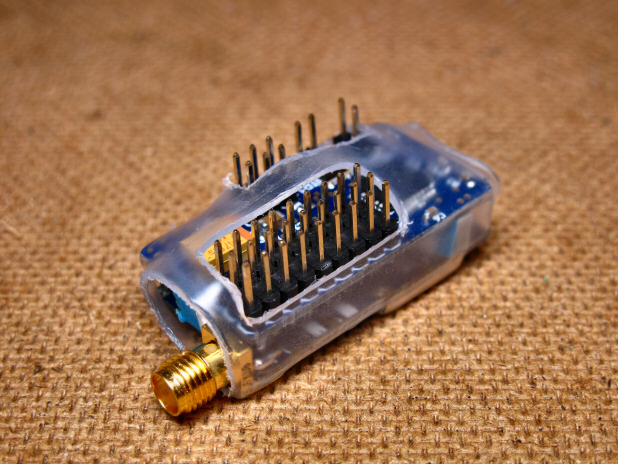 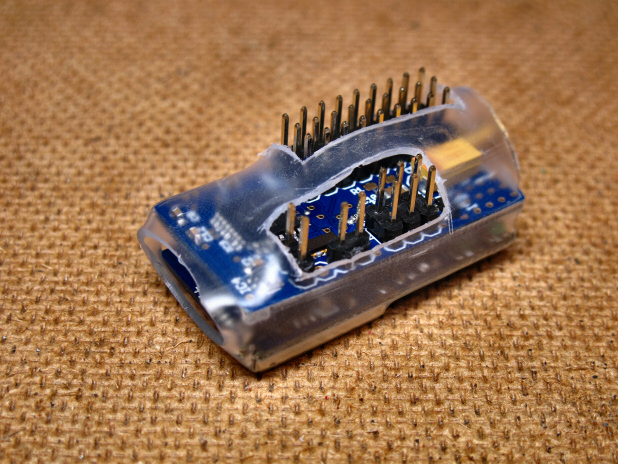 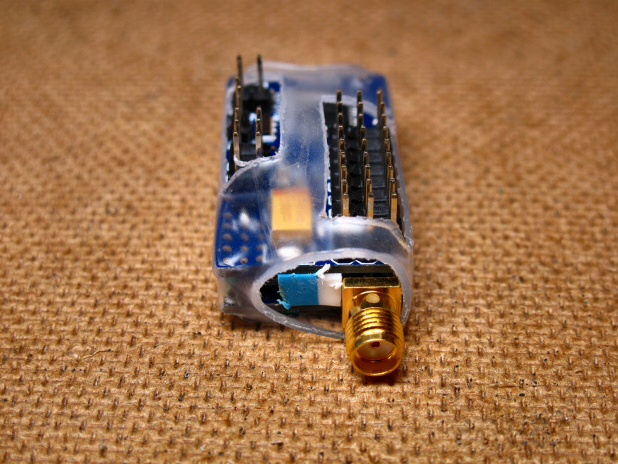 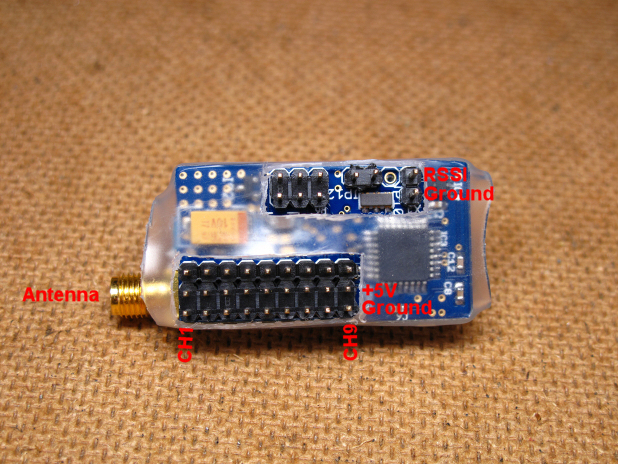 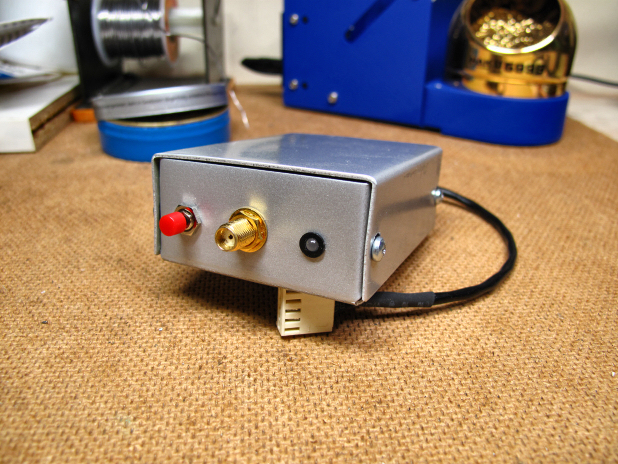 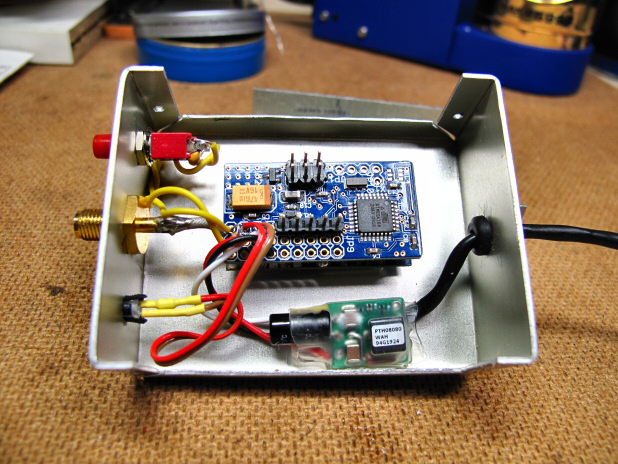 Hooking up to a Radio

The first thing you want to do would be to hook the transmitter up to your radio. Typically, you will connect it to the trainer port or the module connector. Different radios will have slightly different ways of connecting things up but the basics are the same. Your transmitter module comes with a cable with three wires, as follows:- 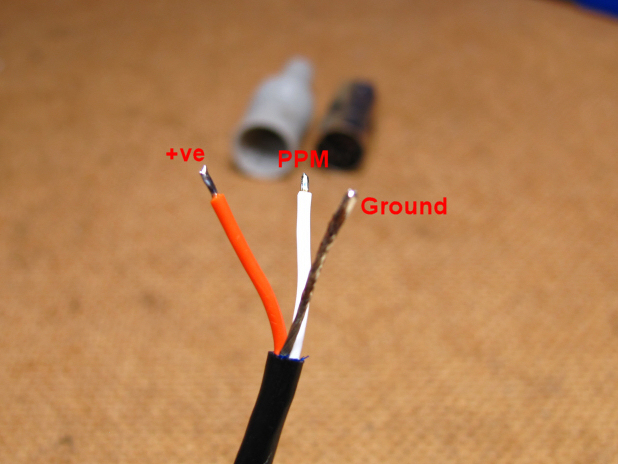 The (+ve) connection on the cable is where the power to the transmitter module goes. This can be external battery power between 6V to 18V, or preferably switched power drawn from the radio for greater convenience. By "switched power", I mean that the power gets cut off when you turn the radio off, as opposed to "unswitched power" which goes straight to the battery and bypassing the switch. Switched power is obviously preferable if the module can supply the current requirements. The exact place to get the switched power supply from the radio varies from make to make. The transmitter module draws about 180mA to 190mA when running off about 8V to 9V. This is similar to what your normal 72MHz or 35MHz module would be drawing for example, so it is not drawing inordinately more power that usual and you can expect normal battery life from your radio.

Note: In newer DragonLinks, a servo style cable is used where +ve is red, ground is brown/black, and the PPM signal is white/orange.

A second consideration you will want to take into account is the existing RF module. Many radios have removable plug-in modules for different frequencies. Where possible, you will want to remove these modules or disable them so as not to be emitting unnecessary RF signals and incurring unnecessary power drain from the unused modules. In some cases, the radios require the modules to be present for proper operation and may require some ways to trick the radio into operating without them. Additionally, some radios have integrated modules and are a little more difficult to remove. The exact procedures for dealing with these will obviously vary from radio to radio. 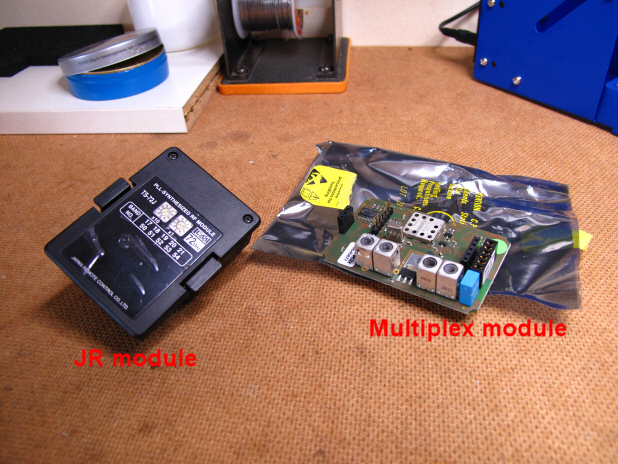 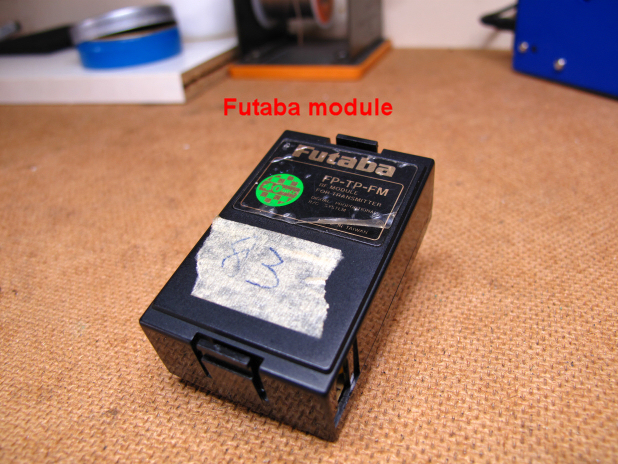 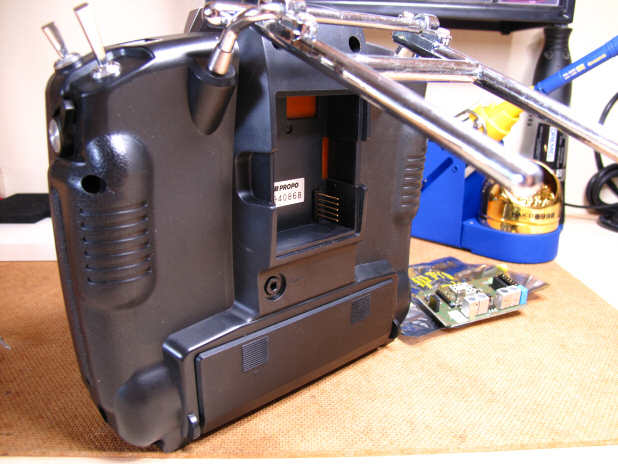 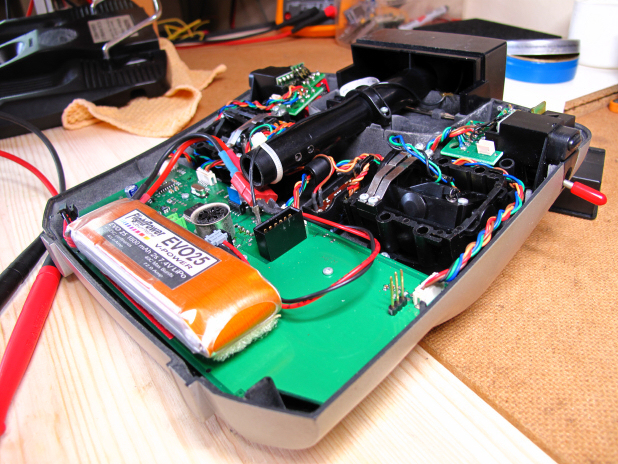 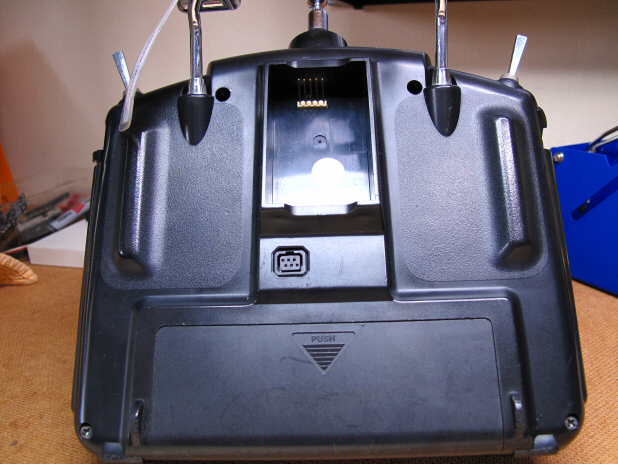 If you are going to power it from the radio, then you need to know if switched power readily available from your radio. In some cases, you may not have power available - such as for JR (and possibly Graupner) radios. These come with a D.S.C. port (their trainer port) which supplies a very low voltage PPM signal but no power. Futabas, on the other hand, provide switched power from the trainer port.

For the more adventurous, you may want to integrate the DL transmitter into your radio. This is going to be a bit more complicated and won't be discussed just yet, but the basic connections are still the same. You will need to make the three connections - power, ground and the PPM signal. It should be noted that the voltage levels for the PPM signal varies widely from radio to radio, and from the module connector to the trainer port connector, and while the DragonLink has been designed to operate across a wide range of PPM input voltages, it will tend to work better in the middle of its' range. We will say more about this later.

Note: For connector pinouts not described in this thread, you can find the information elsewhere, such as http://www.mftech.de/buchsen_en.htm where many pinouts are listed. We cannot, however, vouch for the accuracy of the information provided elsewhere so please double-check everything.
Top

Hooking up to a Multiplex Royal Evo/Pro

Okay, let us say that you have decided to take the easy route and connect it to the trainer port. This is a good solution because you don't have to open up your radio and you can easily plug in or remove the module. The first thing you will need is the appropriate connector that matches your radio's trainer port. For the Multiplex radios, this is a 7-way DIN connector (older Multiplex uses a 5-way connector). 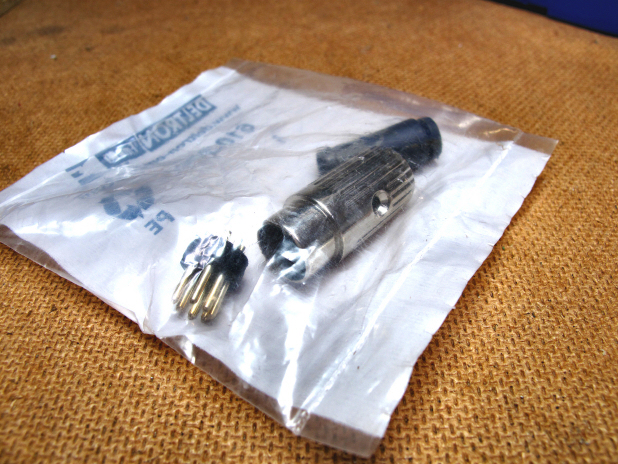 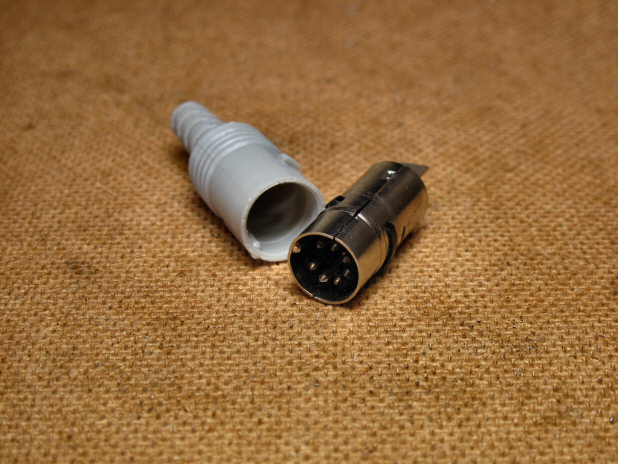 There are many types of DIN connectors you can buy. The best would probably be a right-angled DIN connector as it will be least obtrusive. 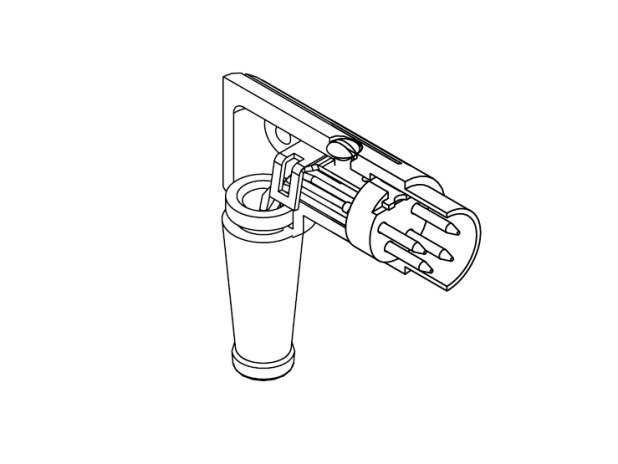 A good place to get these would be:-
http://www.dem-uk.com/jkcm/Products/Del ... Angled_DIN
The back of the connector looks like this, note the pinouts:- 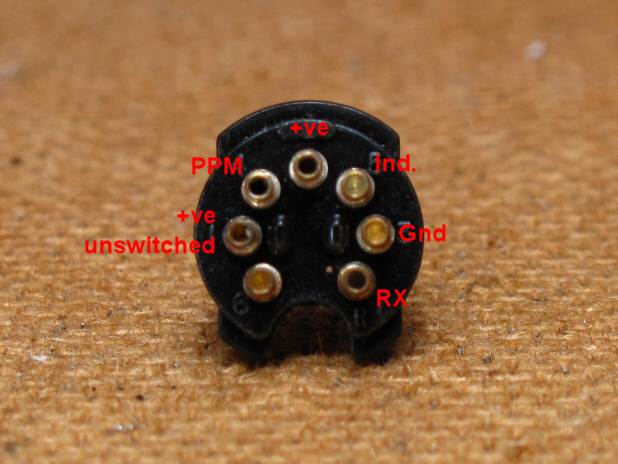 So, basically the red/orange wire on the cable goes to the (+ve) terminal, the ground wire goes to the GND, and the white PPM wire goes to the PPM terminal on this connector. Now, here's the thing with these Multiplex radios - you need to also ground the Ind. terminal for the PPM to continue being output from the radio. 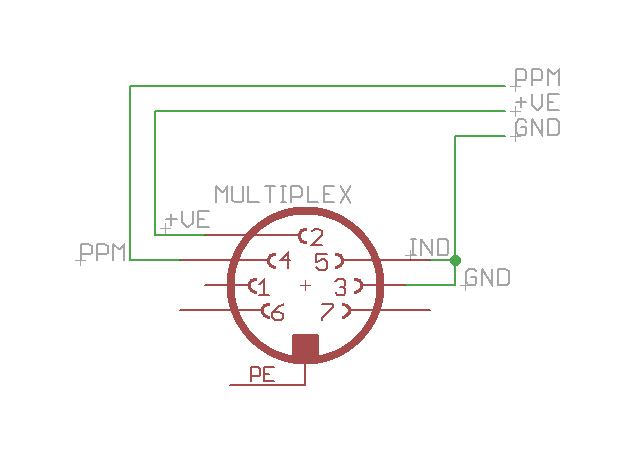 Hooking up to a Futaba 9C

The situation with Futaba radios is pretty much similar except that the connector is a mini-square connector. 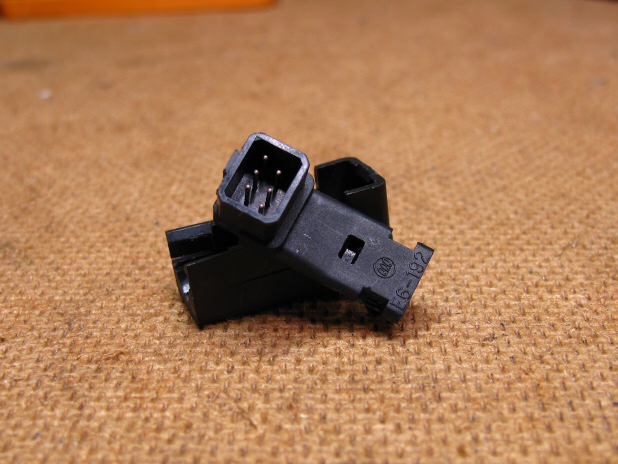 These are available from a number of sources, including:-
http://www.endurance-rc.com/cablesplugs.html

The pinout of the trainer port connector ias as follows:- 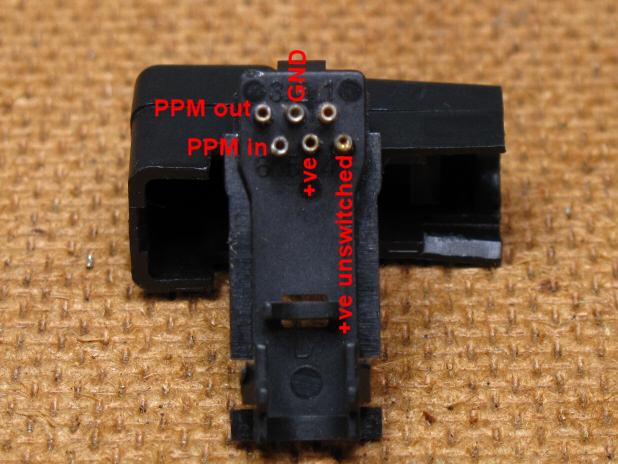 The red/orange wire on the DragonLink module's black cable goes to the (+ve) pin, the ground wire (shield) goes to the GND pin, and the white PPM wire goes to the PPM out pin on the trainer connector. 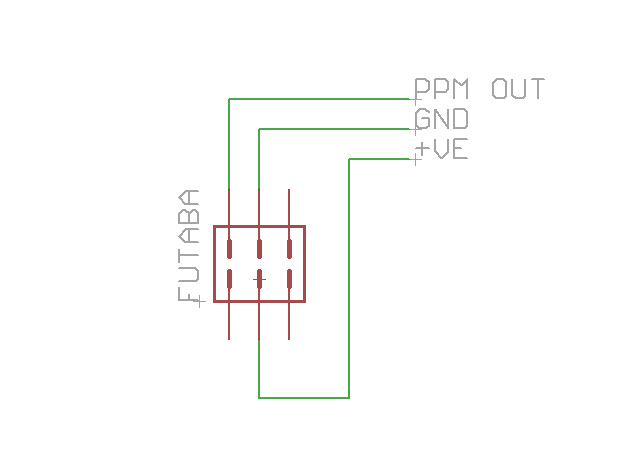 JR calls their trainer ports the D.S.C. port. This is basically a regular stereo connector and plugging anything into the D.S.C. port will automatically power up the radio in trainer mode if it is not already switched on. This can prove to be rather inconvenient because you cannot then leave the plug in the socket, requiring frequent plugging and un-plugging which could lead to connector failure. Not only that, there is no power available from the D.S.C. port so you will have to find some other way of powering the DragonLink transmitter module. To connect to the D.S.C. port, any 3.5mm stereo jack will do:- 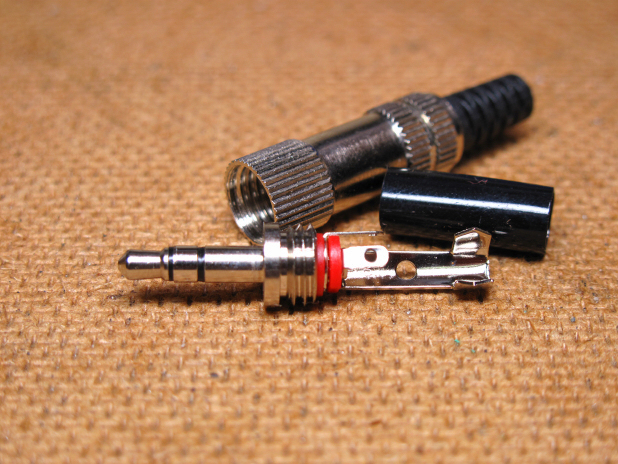 The D.S.C. port is connected as follows:- 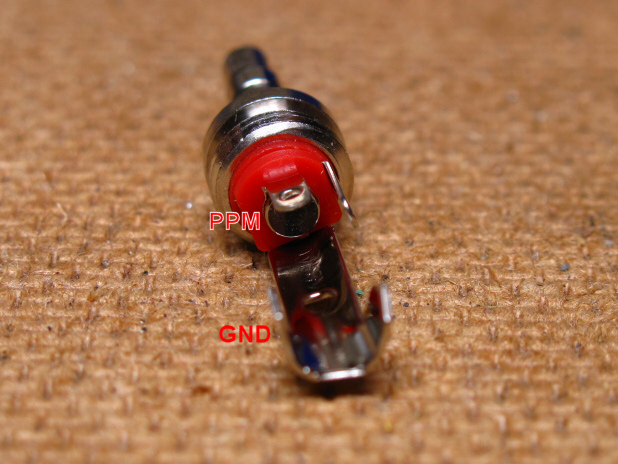 Hooking up to a JR 9X2 module connector

By now, some of you may be wondering about connecting the DragonLink transmitter module to the module connector on the radio instead of the trainer port. We will be looking at how to do this for the JR 9X2 right now. The first thing you'll need to do is to remove the standard RF module from the back of the radio. This will expose a set of five pins and they are identified as follows:- 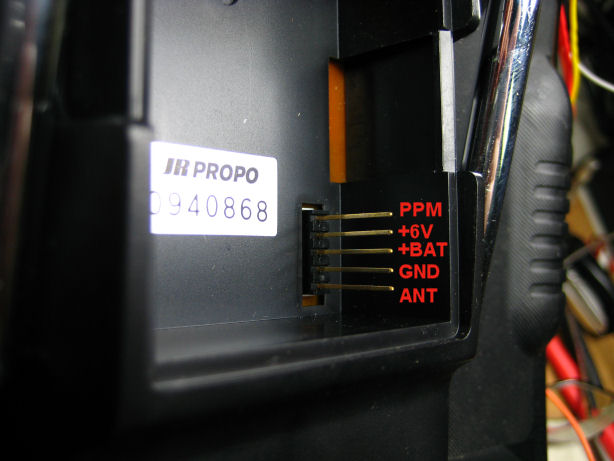 The connection is made using a suitable connector, such as a Molex connector pictured here:- 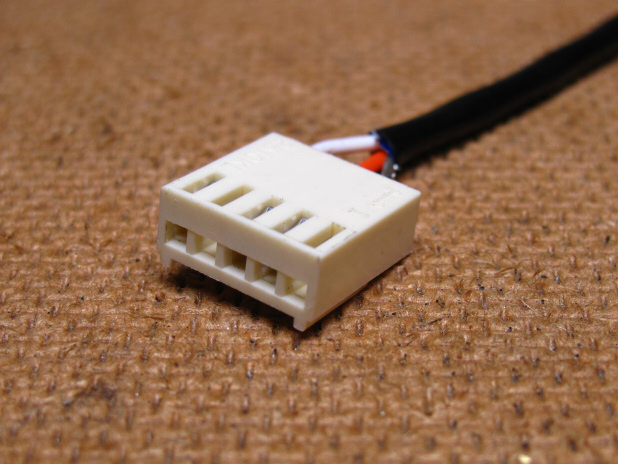 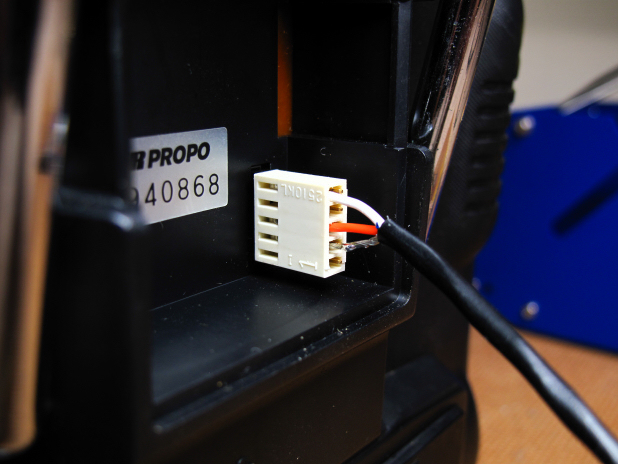 Hooking up to a Futaba T9CAP module connector

The Futaba module connector is similar to JR's, consisting of five pins at the top of the recessed area where the module goes. The pins are identified as follows:- 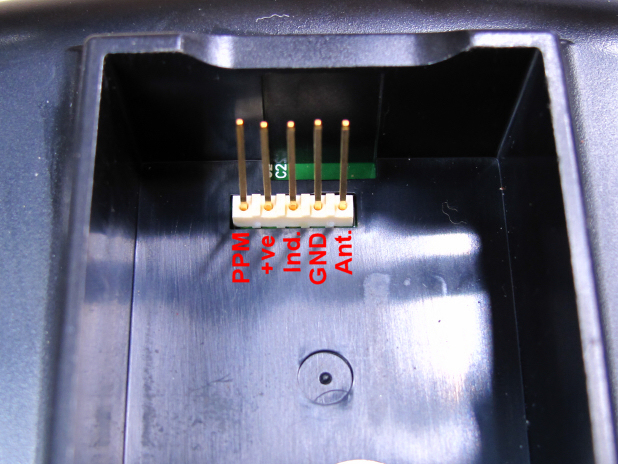 The connection can be made using a suitable connector such as a Molex 5-pin connector. The actual connection to the cable, however, is a little bit more tricky. First of all, the Futaba's module PPM signal is actually an open collector and while the DragonLink transmitter has already provided for this, it might be useful to add a 10k pull-up resistor for the PPM line if possible. That said, the transmitter will probably work fine without this pull-up resistor. If you start losing your PPM signal intermittently, as evidenced by a flashing red LED, for example, you may want to consider adding the 10k resistor from the PPM to the (+ve) line. I should add that this 10k resistor (R2) isn't always recommended - in some cases you should not put that on, depending on the signal level.

The second thing to note is a cosmetic issue. The T9CAP has a blue/green LED which indicates that a module is plugged in. This LED will not light up unless the Ind. line is grounded. If you want that LED to light up, then you should add a 1k resistor from Ind. to GND. 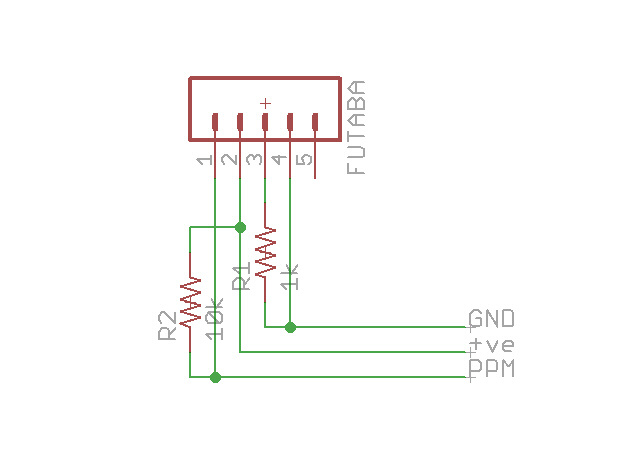 Connecting up the DragonLink receiver

The DragonLink receiver is connected in the same way as you would connect your normal receivers. The channel assignments vary from manufacturer to manufacturer so it would be good to check to see if all the channels are responding correctly. 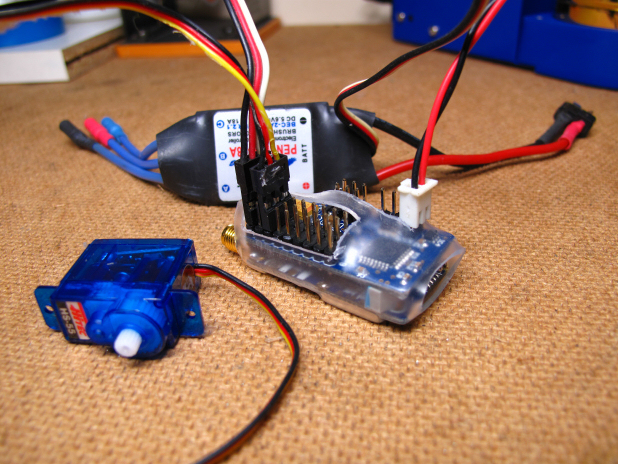 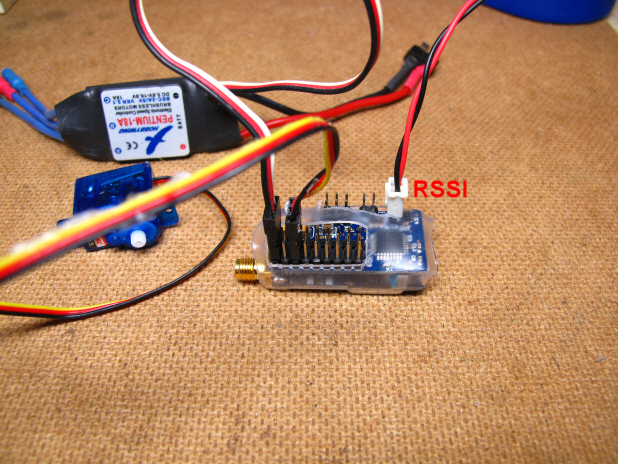 At the time of writing, the RSSI connector is left under the heatshrinking so if you intend to use it, you will need to cut a hole in the heatshrink to make the RSSI output pins available. The RSSI output voltage varies from 0V to 3.3V (actual dynamic range is a bit smaller) with a higher voltage indicating a stronger signal. The voltage varies linearly with the dBm signal strength.

It just occurred to me that RFI can easily find its' way into the receiver via the power supply lines. As such, if you are sharing your power with your video equipment or camera (which can be a notorious source of RFI) - you should put an RF choke on the power lines going to the receiver. This is to block the RFI getting in via the back door.

Twisting the cables is only good for blocking common-mode RFI which is not coming in via the lines directly but through signals picked up. Twist the wires, it's good, but also have that RF choke on. There are many types you can use, but do use them.