The Lawmate 2.4GHz 500mW transmitter tested puts out a hair under +27dBm (around 26.5dBm). The output power decreases as the unit gets hotter. At the highest output power, the current drawn is about 450mA which falls to around 410mA as the unit grows hot and output power decreases. Video impedance was on the high side, surprisingly, at 360ohms. This means that you would need about 100ohms in parallel to the input to bring it down to 78ohms, which is closer to the 75ohms expected. This could impact the colours and dynamic range since all the voltages would appear higher than normal - resulting in 1.65V p-p signals instead of 1V p-p signals. Whether this is intentional or not remains to be seen.

The IF 2.4GHz 10mW transmitter actually puts out around +11.8dBm (about 15mW). As you can imagine, output power is fairly constant due to little heating effects. Channel 2 was measured at 2.43202GHz. Video impedance was measured as 71ohms, which is good enough.

The unit under test is the one found in the following link:-

The module used in this transmitter appears to be the SKY-TX24500 (see attached datasheet) but the output power is 1W. It is possible that it is a custom modified version of the same module.

The nominal specifications are 2.4GHz, 500mW (+27dBm), 50ohms load. 8-channels are available. The particular board under test has seen some damage and repairs as evidenced in the following photo:- 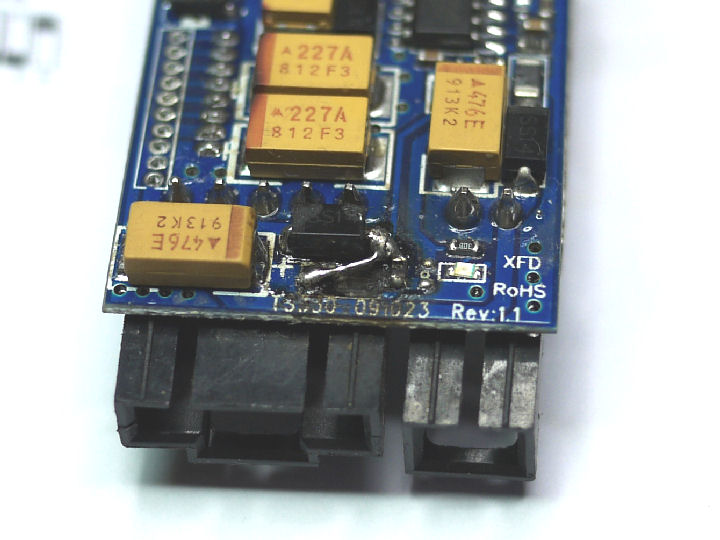 Furthermore, the unit originally came with RP-SMA connectors which were not compatible with all my other equipment. As such, I had to re-fit the board with a regular SMA connector for the purpose of testing. Again, it should bear mentioning that the board that I received for testing has seen some re-working. 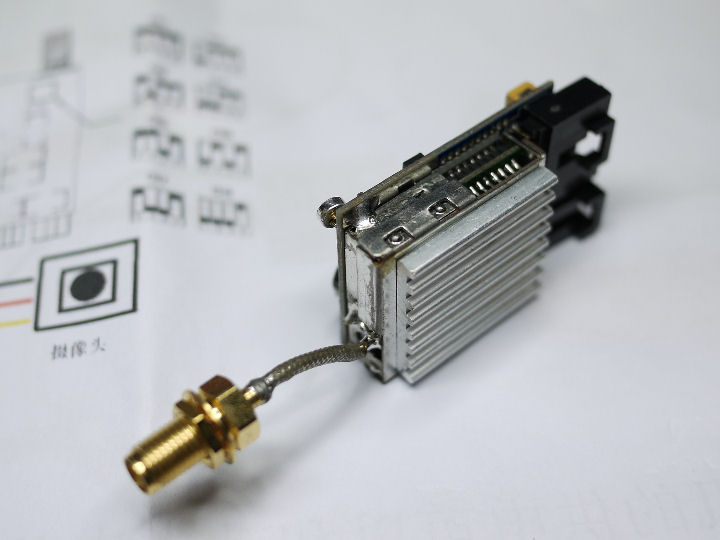 The specifications state that the operating voltage should be between 7V to 16V. The module comes with a switching power supply which efficiently steps the voltage down to the requisite level (the board itself appears to run on several different voltage levels for the different parts.) Tests show that the board draws approximately 3W of power across the specified voltage range (0.45A@7V, 0.25A@12V) with efficiency being slightly better at higher voltages. We will come back to this consideration in a little bit. Even so, the current draw is a little higher than what one might expect from a 500mW transmitter. The Lawmate 2.4GHz 500mW, for example, draws 0.45A@5V for a total power draw of 2.25W. 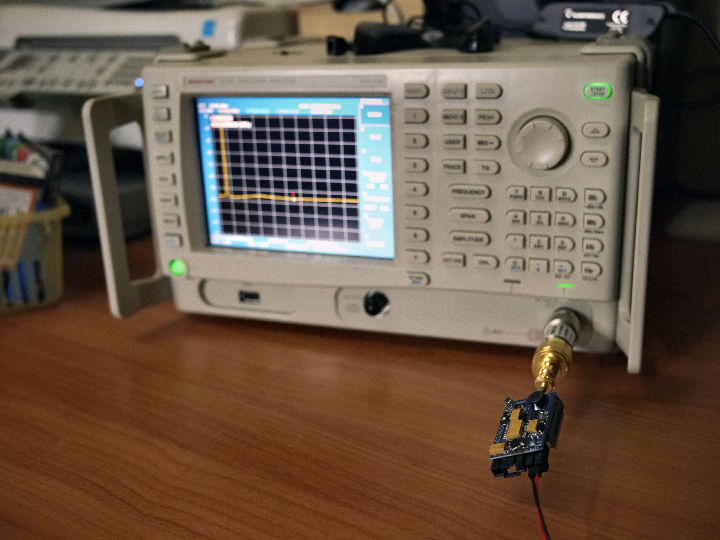 Testing reveals that the output power of the transmitter was actually +30dBm (1W) rather than +27dBm. 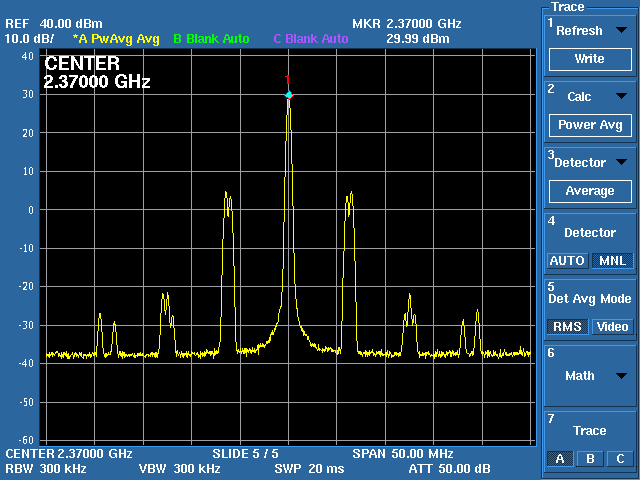 Power stability is good with negligible degradation over temperature (output power crept up as the unit started to get hot.) Like the Lawmate modules, the heatsink was mounted on the wrong side and probably does little to help with heat dissipation. In fact, the heatsink actually covers up the ventilation holes and could actually be making for poorer heat dissipation. Starting from a room temperature of 29-degrees Celsius with normal circulation (but no forced convection), the temperature rose steadily until it stabilized around 61-degrees Celsius. With forced convection, the temperature should not reach this level. The output power remained stable up through to 59-degrees Celsius and then showed the slightest decrease above that (about 0.5dBm). Frequency drift was around +20Hz for the tested temperature range (positive coefficient.)

The board also sports a small electret microphone but it jut out a bit from the board and would be prone to damage. Furthermore, having a microphone on the transmitter itself (which is usually exposed to wind for cooling) may not be the best idea. It is there, nonetheless, for those who need it, and there is a little trimmer on the board that appears to be for adjusting the microphone audio level. There were no instructions for disabling this microphone but you might be able to use the trimmer to zero the microphone gain level. Additionally, there are two audio inputs (labelled 6.0MHz and 6.5MHz) in the instructions, presumably catering for different TV systems but no stereo audio input.

Measured channel frequencies are as follows:- * note that there is some confusion about the channel settings on the datasheet.

The input impedance was measured as 72ohms resistive, which should be close enough to standards for video terminating equipment.

On the whole, this looks like a decent system. The test was done with no video modulation so no comments can be made concerning the video deviation and quality. The first harmonic in the 4.74GHz was -35dBm or -60dB down from the fundamental so this is spectrally quite clean. The switching power supply board is not coupled sturdily to the transmitter module so some care should be taken when handling and mounting the unit to avoid stressing the joint. Special attention should be given to the fact that the CH1, CH2, and CH4 frequencies do not correspond exactly with that of Lawmate's, so if you happen to be using Lawmate receivers, you should avoid these channels as some performance penalty will be incurred due to the frequency mismatch. At USD62/watt, it's not a bad deal.

The Lawmate LM500 transmitter is one of the most popular 2.4GHz transmitter modules. It is so named due to the 500mW rated output power. They are very compact (weighs only 12g) and comes with a heatsink which is mounted on the wrong side of the module and, as a result, does little to dissipate heat. In fact it may actually make things worse because it obstructs the ventilation holes on the tin shield. The newer LM500 module is slightly better in that there are more ventilation holes in the casing and slightly more clearance. 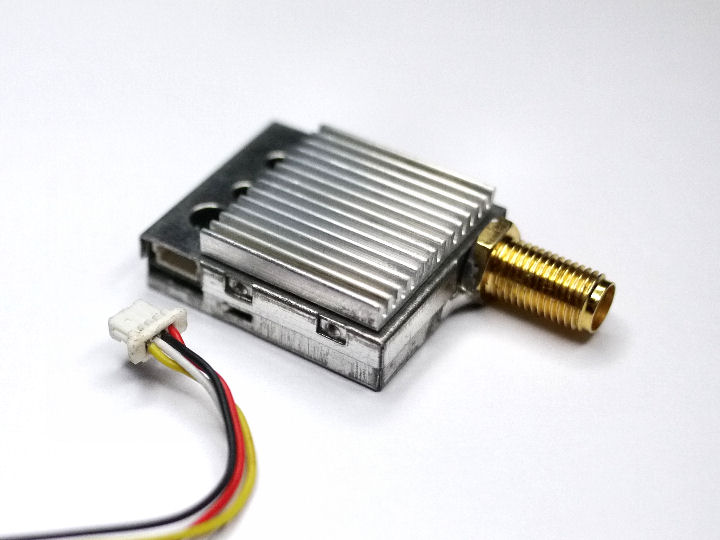 The connecting plug is very small and with usage, the wires have a tendency to fray or come loose (see yellow wire in photo). Some care needs to be taken with this connector.

There are some interesting things (irregularities) about this module. To begin with, the channel assignments of the old LM500 is as follows:-
The new version of LM500, however, has a different sent of frequencies, as follows:-
These channel switch positions are set using the chart that came with the new LM500 module. It is possible that the older module has a different chart. I'm not sure at which point they changed the channel assignments. The old and new boards, otherwise, look identical. New Lawmate receivers conform to the newer channel assignments. These changes aren't just in the software though, as I discovered. The following shows the spectrum sweep of the old and the new modules respectively:- 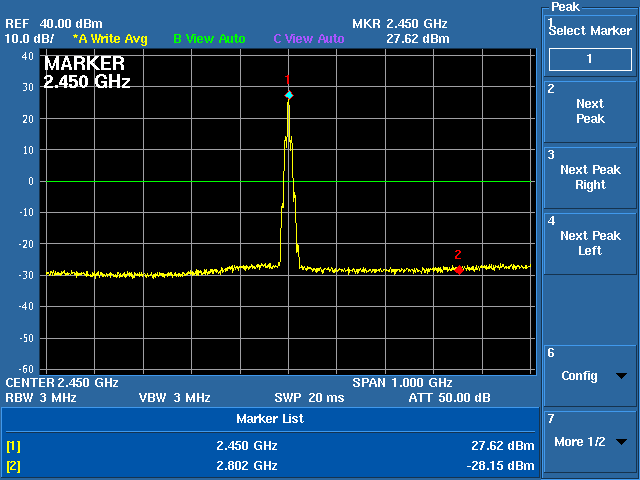 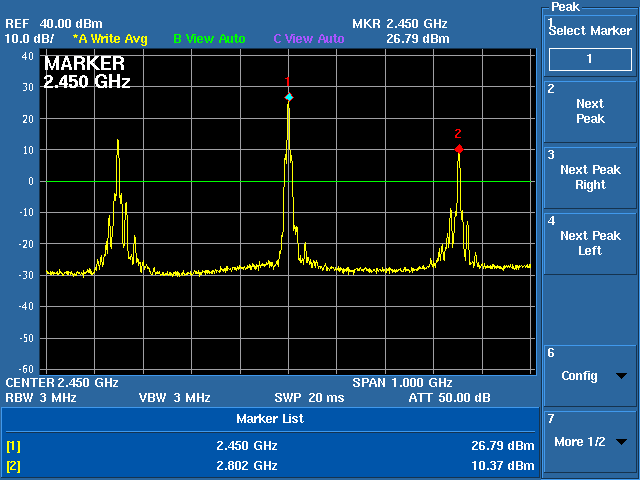 As you can see, the older LM500 is more spectrally pure than the new LM500. There seems to be an unfiltered IF image product (350MHz IF) that's quite strong. (There is an accessible green trimmer that appears to be part of the VCO circuitry and could be used to fine tune the frequency. I have not verified this so unless you have the proper equipment, it would be best to leave that trimmer alone.)

Both show the same tendency to drop the output power a little (by up to 1dBm) as it grows hotter. Both draw around 450mA at 5V for about 500mW output yielding an efficiency of 22%. Output power is very sensitive to voltage and can rise and fall with voltage fluctuations. The module is rated to only run at 5V but in some cases, it is sold with a cable with an embedded switching regulator which will drop the voltage to 5V efficiently.

One of the problems with the LM500 design is the tin cover. Over time, the metal oxidizes/corrodes if exposed to moisture, and the contact between the two halves degrade. When this happens, vibrations can induce varying degrees of contact with the cover and this can result in frequency fluctuations which show up as interference lines on the video image. One way to reduce this is to solder the halves together.

Another irregularity of the module is that the video input exhibits a passive impedance of around 345ohms, as opposed to the more regular 75ohms. This may affect the image dynamics but can easily be corrected with a 100ohm resistor in parallel with the input. (In the case of the 1W Lawmate 2.4GHz transmitter, the input impedance measured around 110ohms so the corrective resistor should be around 220-240ohms.) Audio input is mono-only.

It has been reported variously that Lawmate has ceased production of this module and/or is re-designing it. Having said that, this is a tried and tested module and is very compact. It's about USD100/watt and so represents a slightly higher investment.