Finally! The GP1600 test results with the new ISR routine handling are in. The GP1600 batteries went in after taking the following charge from the charger:-

The discharge curve is as follows:- 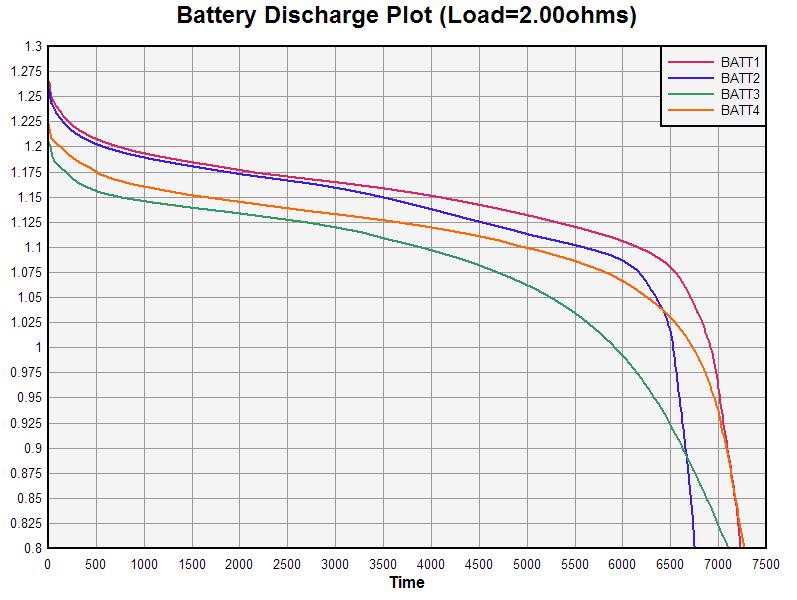 Right off the bat you can see that the CH3 behaviour is much better now. All the curves are also better matched as well. The reported capacities are:-

This is looking to be pretty closely matched to the charge taken since some of the charge is usually dissipated as heat and each cell may have had slightly different state of discharge upon start of charge cycle. Basically, I am quite pleased with this performance right now.
Top

The Sanyo2700 test with the revised ISR code, and 200Hz PWM frequency is done. The batteries took the following charge going in:-

The graphs are as follows:- 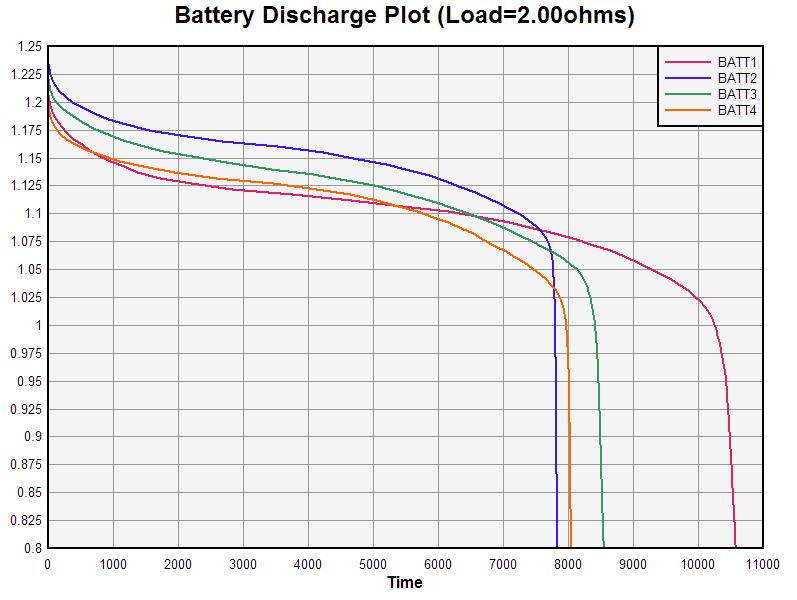 The general capacity report follows the charge intake. The overall capacity reported of these cells are pretty poor though so we will put the cells through an analyze cycle to see just how close we are. The graph, otherwise, exhibits no major anomalies although CH2 seems to be showing a tendency to have a steeper knee. I'm not entirely sure why this is the case at the moment though. This was also the case with the previous GP1600 test with PWM at 500Hz. Mitigating this, however, is the tendency of BATT2 to show this type of behaviour regardless of which slot it is occupying so it may simply be a battery problem.

Okay, I think we're there in terms of calibration. This set of results from our GP1600 went in with the batteries taking the following charge:-

The resultant graph is nearly identical to the previous test set, which is to be expected since the batteries were occupying the same slots. 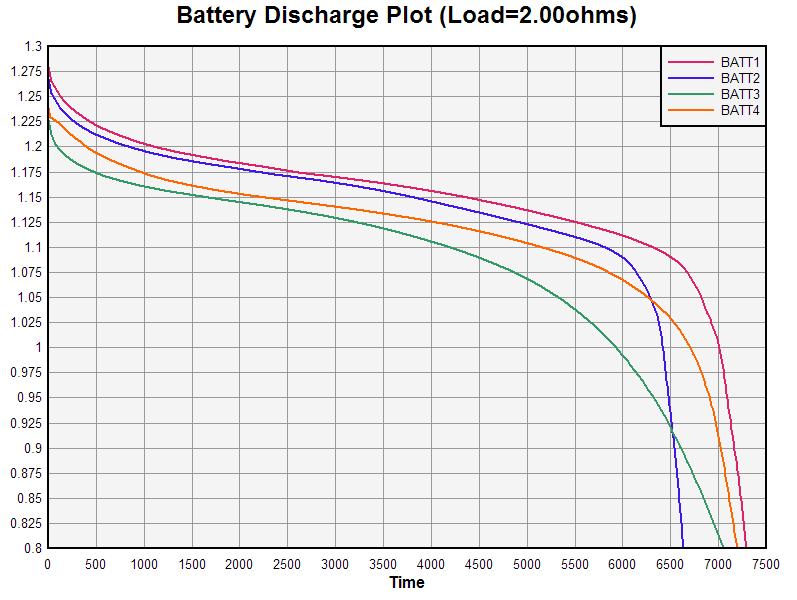 The reported capacities for this test were:-

Again, these were remarkably close to the previous test set results to within about 1% or so. In short, we have consistency nailed here. What we now need is to get some agreement between our reported capacities and the C-9000's analysis results. It should be noted that while similar, the reported capacities right now are not totally correlated to the C-9000's report about 11-cycles ago. We will have to do a fresh analysis of the current set to get verification of the numbers and to see if we need to scale the results some. On the average, however, actual charge capacities are about 85% of charge taken. Using this as a guideline, we estimate the charged capacities of the battery from the charge taken to be about:-

These estimated results corresponds very closely to our reported capacities so our results are in fact very credible. We just need to do one more test with this set with the batteries in different slots.

I finally decided to profile a set of new ReCyko's after running them down a bit in my audio recorder. The batteries only took about 800mAh so it probably wasn't really empty. In any case, I ran it on the tester CH1 and CH2 and this is what we got:- 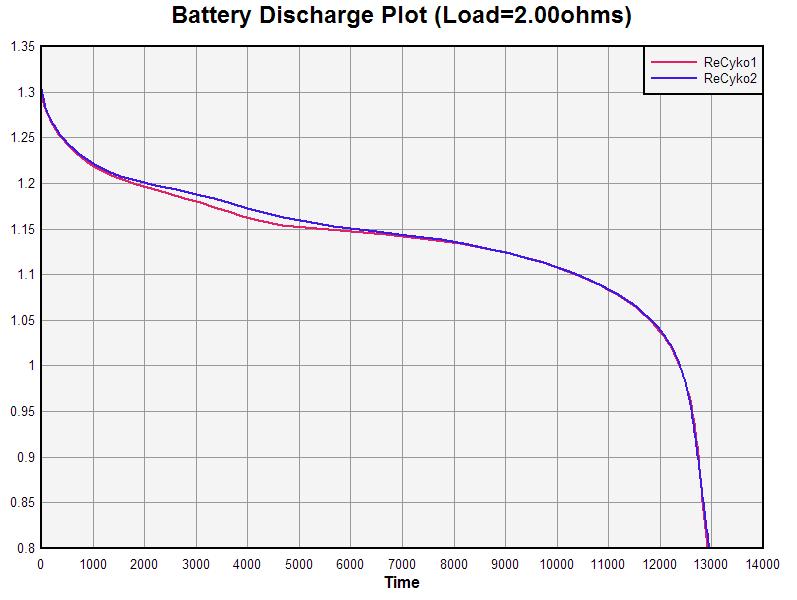 The reported capacities were:-

A couple of things to notice - first of all, notice how closely matched the two curves are - which is a very good sign as this shows our tester to be repeatable and reliable. Secondly, the ReCyko batteries have a 2050mAh typical capacity rating so we are spot on there.

As a last check of the system consistency, I charged the GP1600's in the ReCyko+ charger and put it through the tester again, this time with the batteries in reversed order (in all in different slots). The results are as follows:- 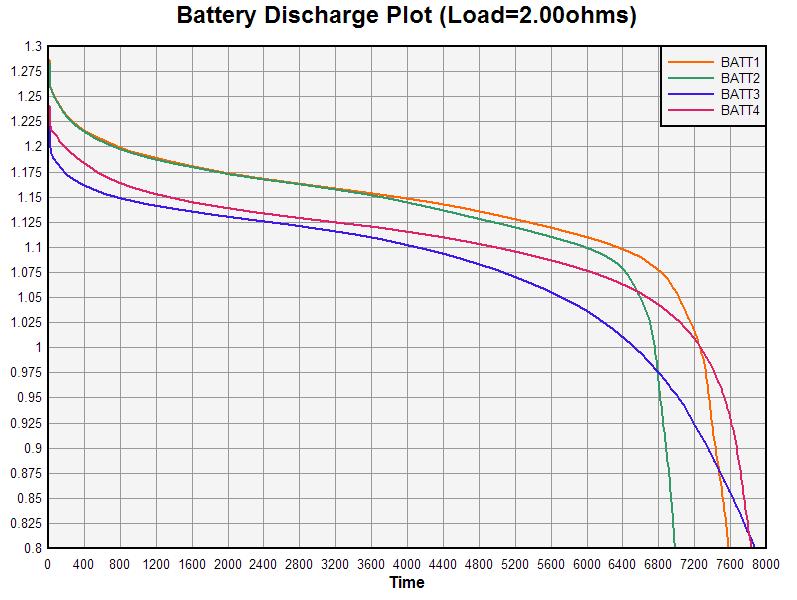 As you can see, notwithstanding the fact that the batteries now occupied different slots, the curves are pretty much identical in profile. The reported capacities are a little higher because the ReCyko+ charger has a higher termination voltage than the more conservative C9000 charger (without the 2-hour top-up charge). The capacities are still close enough though such that we can trust in these readings.

These are some of the batteries that are lined up for the test. So far, I'm not including regular Ni-MH rechargeables, on the LSD types. A couple more that I want to include are the Panasonic Oxyrides, SONY LSD's if there are any, perhaps Kodak, several other cheap house brands, Duracell Ultras, and possibly some dry cells. For the moment though, these are what we have:- 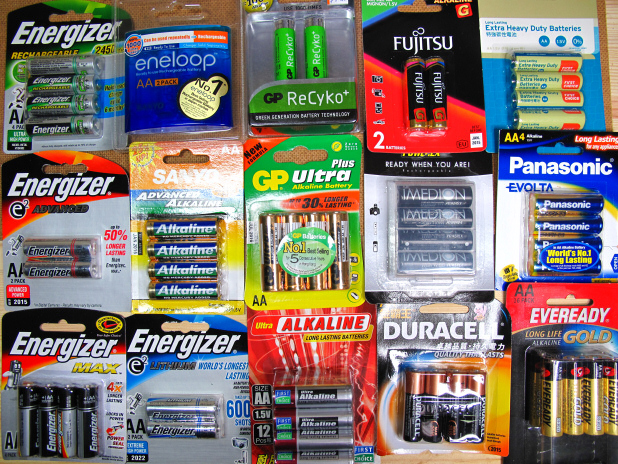 I'll have to go battery hunting again soon but these things are costing me a fortune to acquire and to test.

After 2-days of break-in, the ReCyko's were showing the following capacities:-

Putting this through the tester we got:- 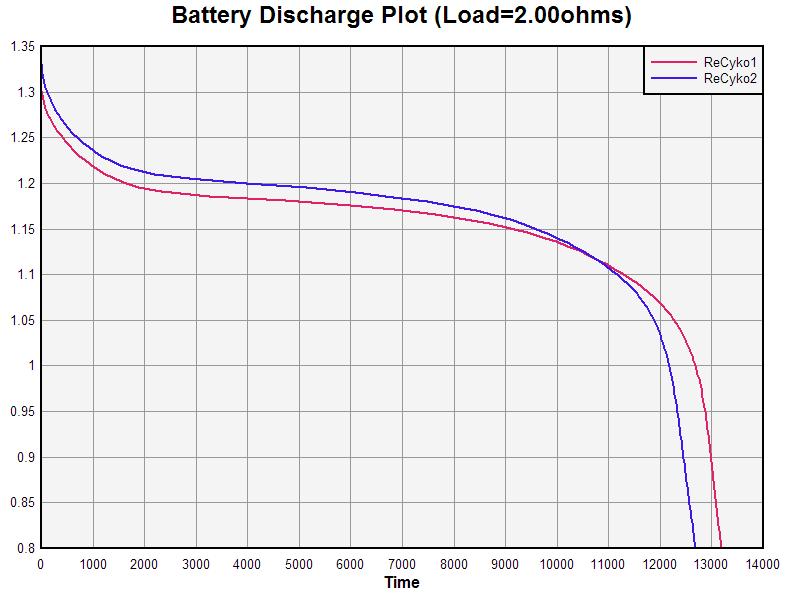 Bearing in mind that we are discharging to 0.8V rather than 0.9V could explain the slightly inflated figure for ReCyko1 but it is otherwise quite reasonable. A bit of scaling may help.

ReCyko2 seems to be spot on, however, but is breaking the trend. In particular it looked to be running at a higher terminal voltage which could suggest that it's coefficient was a bit on the low side, or that CH1-CH4's are on the high side. Unfortunately it looks like CH5 is out of step with CH1-CH4 so we should avoid using it where possible and stick mainly to CH1-CH4 for our testing purposes.

We charged the ReCyko's again, taking the following charge:-

The actual charge will be higher since we allow for 2-hours (and more) of topping up. The test curve is as follows:- 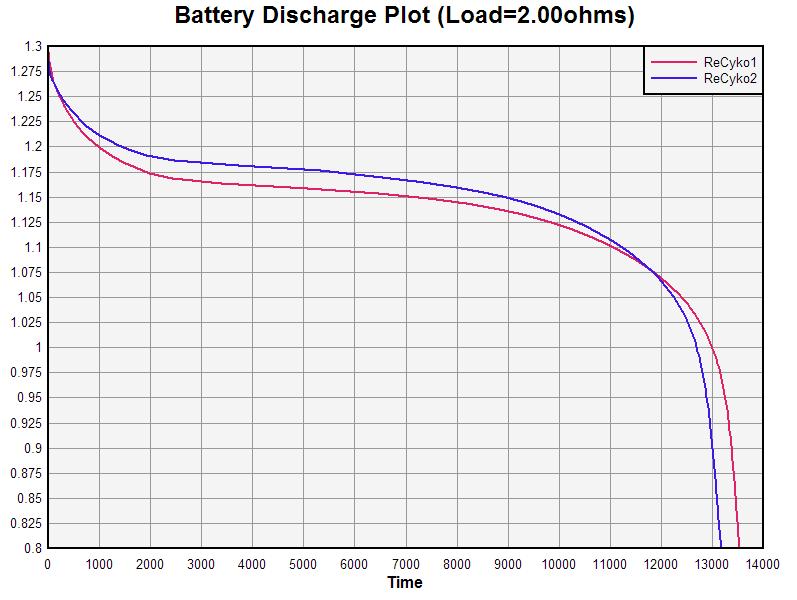 The curves no longer seem as closely matched as they were before we ran the break-in cycles although capacities seems to be higher. If we look at the mWh ratings though, we can see that they are still very close - reinforcing the idea that mWh is actually a better measure of capacity than mAh is. Nevertheless 29mAh of difference is practically neglible for all intents and purposes. I think for some of the other cells, I will start without break-in cycles. Repeatability is high but we will do one more test with the batteries in reversed holders to confirm that the behaviour is due to the cells and not the holders.

Okay, we re-tested the ReCyko's in different holders to see if the general trend holds. Results were:- 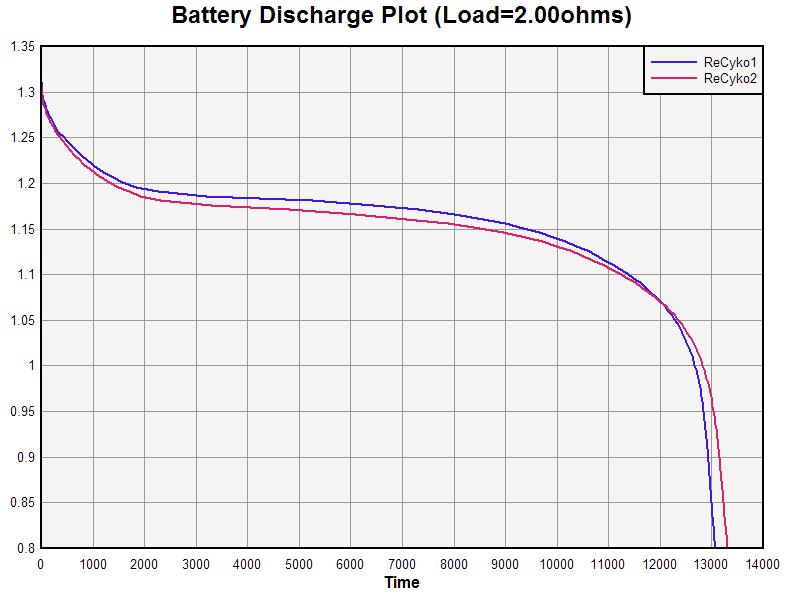 Seeing as to how the CH1 (blue line) is still higher, we may have a calibration type of issue. I think it might be better to do all the tests using just the best matched channels. This could be CH2 and CH4 or CH1 and CH3. We will have to look at the measured bits to ascertain this. It is also possible that this kind of behaviour is impossible to solve without better matched load resistors. The problem here is that a channels lower load resistance is being made up for by a lower PWM duty-cycle so that it draws more current but for a shorter period. The end result should be the same but the chemical impact is not. As a result it is going to be difficult to match the curve profile. 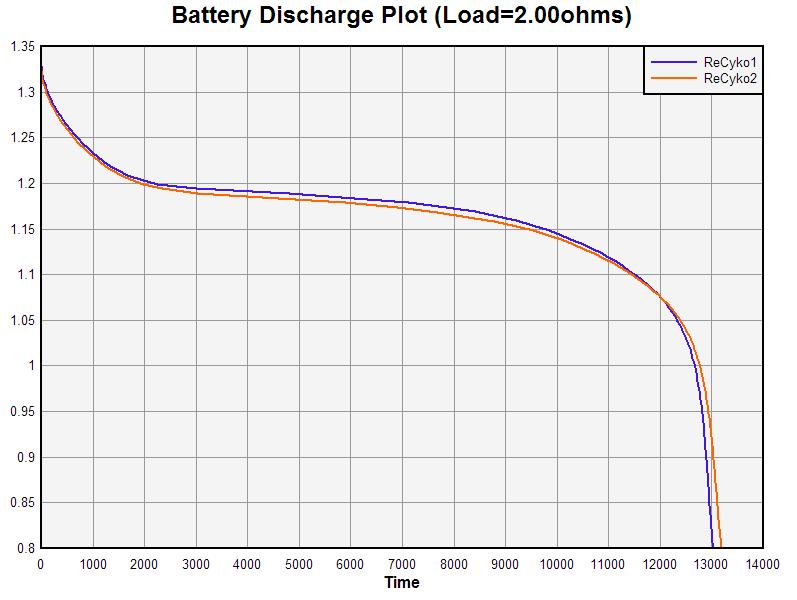 The reported capacities were also very much closer, expectedly:-

This gives us good reason to use better matched loads.