I have noticed for quite a while, the uncanny number of resemblances between emerging Charismatic practices/teachings with that taught in the New Age and Spiritism movements. How intentional this is is unknown at this point but may speak of the prevalence of New Age in the American background. I won't be surprised if some of the current proponents have had dealings with New Age or Eastern religion, given the similarities.

In case you don't know what New Agers think or teach, they basically have a pantheistic world view where everything and everyone is God, basically, and that there is a universal connectedness. You can read the Wiki entry here to familiarize yourself:-

The Power of Sound

The first time I heard about this was when I learnt about Dan McCollam's teaching in SSM in 2011. Truth be told, all I knew and heard was that:-

1. it was very powerful
2. it was about the power of sound

My initial response was - well, maybe it's about how God uses music - and didn't give very much thought to it. However, in ongoing research, I came across some interesting snippets here and there.

This interesting article is NOT my Dan McCollam but obviously someone influenced by his teaching. What I found interesting was that the focus was on the sound, rather than God. The author writes about the "intersect of quantum physics and the ways of God." The terms used in the article has a quasi-Christian feel to it but if you look really hard, this is about the power of sound more than it is about the power of God. Okay, that's not completely out of the ball-park in itself.

Then there is this longish article by Purcell entitled "The Other Side of the Secret" (see attached PDF). The author was also deeply influenced by Dan McCollam and in the preface writes the following:-

"I had the privilege of listening to a teaching called God Vibrations that was done by Dan McCollam. Dan’s teaching is about how science and New age are proving the Bible."

Okay, this is getting uncanny - with several people making the unspoken connection to the New Age, and these aren't even detractors, they're supporters of Dan McCollam. Now, it turns out that it is not just Dan McCollam and his idea of the power of sound or God vibrations, but the entire premise has become a common teaching amongst the emerging neo-Charismatics.

By this - I mean that there is a clear attempt at trying to link "quantum physics" to Christian faith going on here. As such, we're not just talking about sound, we're talking about light, smells, the whole works. This is a very strange development since classical Christianity contains nothing of this sort. You can find pages such as the following:-

You can go straight to chapter 12 (Quantum Mysticism):-
http://heavensphysics.com/chapter12/

And in there, you read pure New Age stuff by Ellyn Davis (I've never heard of her before this.) For example, it says in on the page:-

"Second, there is the belief in a single universal consciousness that permeates all things."

That, is pure New Age - no doubt about it. You can Google this or you can just read it here:-

The rest of the available chapters are really nothing more than an attempt to baptise New Age metaphysics in Christian language. Zero biblical basis at all, and where they quote scripture - it is either completely irrelevant or wrongly applied. This is bizarre.

Okay, this is getting beyond uncanny. Let's check more then. Here is an excerpt on the Eastern concept of the universal sound, the power of sound, if you like:-

"OM (AUM) is an ancient sound. For thousands of years it has been chanted in Devine Mantra’s to achieve healings of the mind, body and soul. The sound OM creates a natural sonic vibration resulting in the alignment of key energy centers throughout the body. For this reason, OM ‘the sound of all there is’ was considered to be the Universal sound."

There is an entire following of New Agers who believe that certain sounds lend itself to healing and so on:-

Now, I need to find out exactly what Dan McCollam teaches and where he comes from on this. It seems that New Age has found a new way to propagate, through Christianity, by changing their terminology and relying on unsuspecting and undiscerning Christians. Based on what I am now reading, I have serious misgivings.

This last Sunday I was handed two books by Joshua Mills for the upcoming conference. The first book was entitled "Atmosphere" with a sub-title of "Creating a Realm for Miracles & Success." Without going too much into the book and keeping to the New Age research of this thread, I looked at chapter 5 of the book where the "quantum mysticism" of the previous chapters lead to a guide on colours and their meanings. Starting from page 69, a list of colours and their meaning/significance is given (in the following order):-

Other than the fact that nothing written in the chapter has any biblical basis or Christian value, it smacked of New Age right from the start. In fact, New Agers explain these in exactly the same way:-

In fact, look at this image and in particular, the sequence of the colours:- 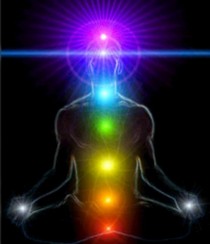 Coincidence you think? This stuff is coming out of Eastern religion - Chakra, Kundalinis, etc.

And to tie it all together - colour and sound, right from where these ideas came from = Eastern Religion. You can read it here:-

Right now I'm thinking, "Dear Lord, what have we gotten ourselves into?"

The whole idea of angels as part of New Age spiritism is not new. Using the term "angels" makes it sound more familiar so that most people are willing to let it slide. However, it seems that what they think of as angels is quite different from what the bible teaches. Here's an article to start us out:-

Matthew Henry's commentary on Heb 1 has a useful comment on why Hebrews refers to angels:-

"Many Jews had a superstitious or idolatrous respect for angels, because they had received the law and other tidings of the Divine will by their ministry. They looked upon them as mediators between God and men, and some went so far as to pay them a kind of religious homage or worship. Thus it was necessary that the apostle should insist, not only on Christ's being the Creator of all things, and therefore of angels themselves, but as being the risen and exalted Messiah in human nature, to whom angels, authorities, and powers are made subject. To prove this, several passages are brought from the Old Testament. On comparing what God there says of the angels, with what he says to Christ, the inferiority of the angels to Christ plainly appears. Here is the office of the angels; they are God's ministers or servants, to do his pleasure."

Extent of influence on Christians:-

I didn't realise there is a discussion sub forum until now.

Just a gnawing question which has been etched inside my heart after reading the sub topic on Bethel and Joshua Mills etc, why weren't these people who came over the years 'vetted properly'? It is quite upheaval that many of the 'foundations' of the COOS Supernatural things are based on questionable sources or could it be the only now the church has been moving in the spiritual which the New Age etc has been doing for some time?

Did not really go through the entire page here, I apologise if the question above has been answered indirectly or directly.
Top

I can't really answer that question but I suppose we can learn from the lessons of the past.
Top

I don't think that question can be answered but yes let's move on together united.
Top
Post Reply
10 posts • Page 1 of 1

Return to “Discussion and Debate”