This is the catch-all forum for anything related to radio life!!
Post Reply
49 posts

1. The output VCO is producing a -1.3dBm repeated signal on 200.175MHz to 200.224MHz. The PLL is not locking and the TUNLK signal is not going high. For some reason, the PLL does not appear to be working.

4. The OUT1 from the TX PLL IC3 which becomes TXVCO_SW is not working.

5. The FO/LD from the TX PLL IC3 which becomes TUNLK is not working.

6. The CPORF output from the TX PLL IC3 which feeds TXVCO1/2 is therefore not locked.

The part in question is the LMX2352TM which appears to be no longer manufactured.

7. The module was fed directly with 145.625MHz at around -5.72dBm to the input pin (50ohms matched) and the output was measured at 30.52dBm. So we're seeing a gain of about +36.24dB on the power here. According to the chart below, the expected power gain is around +38dBm so we're in the ballpark. The module is likely to be working. 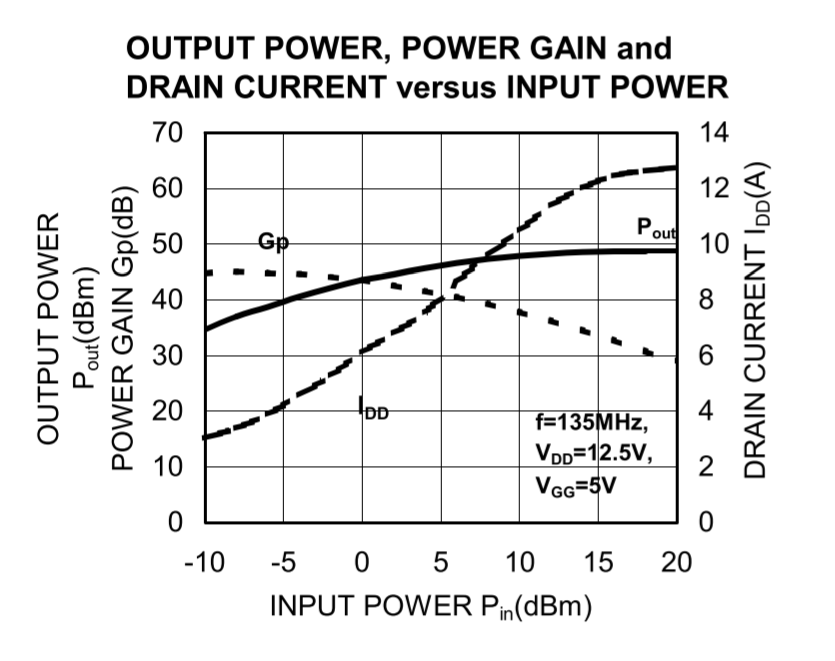 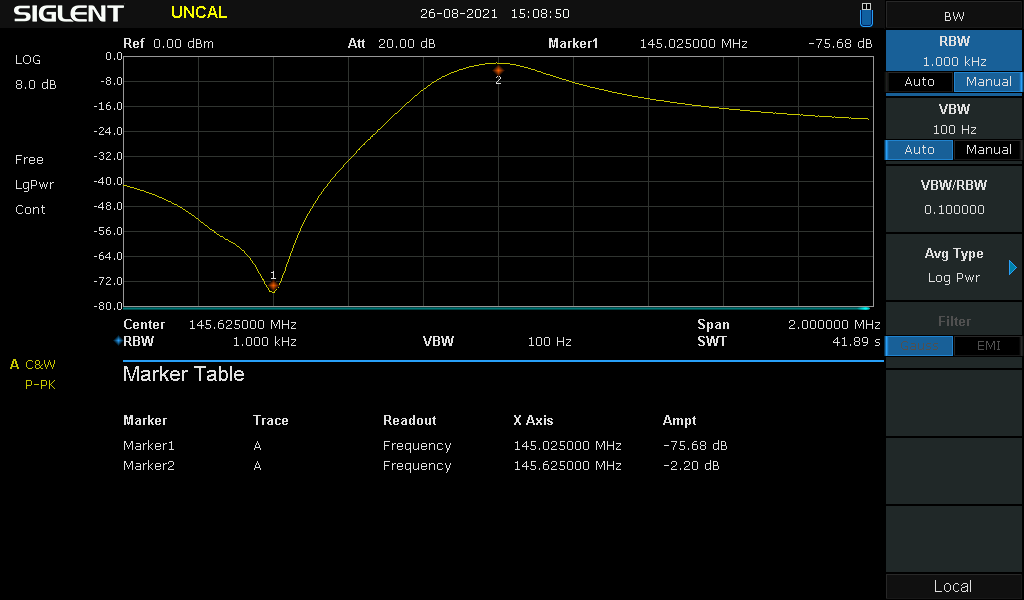 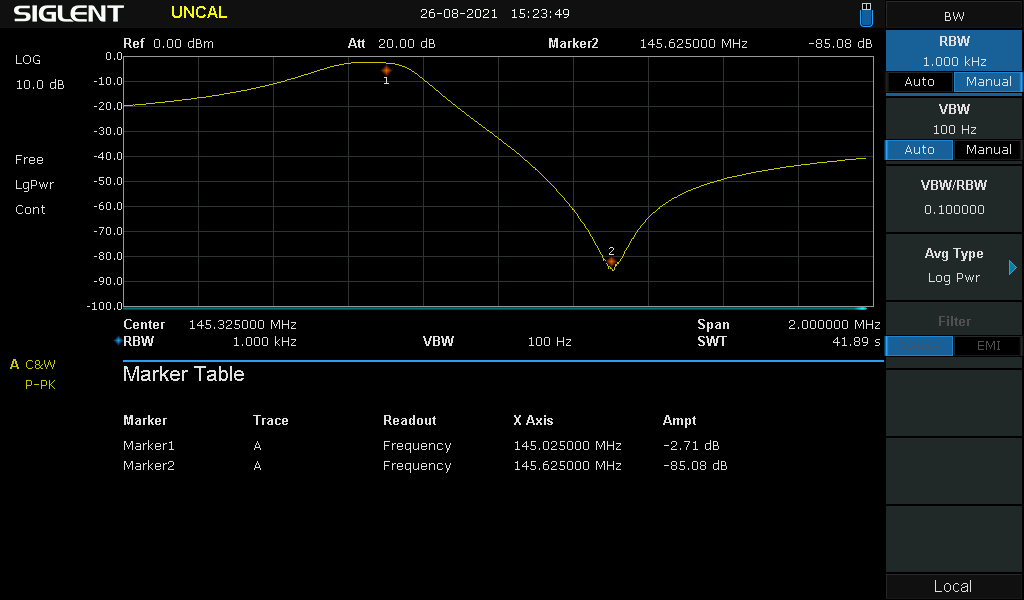 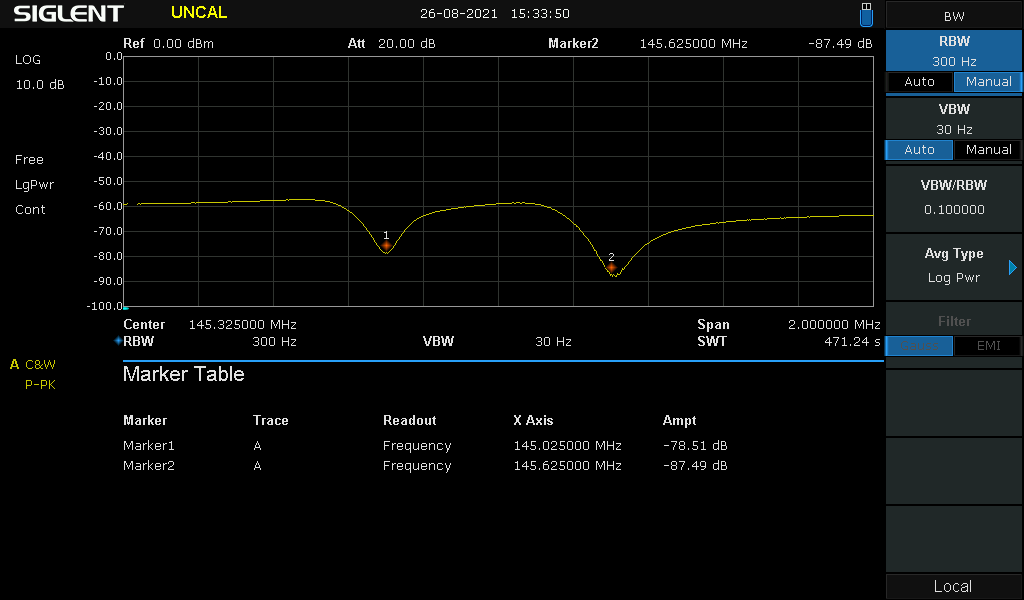 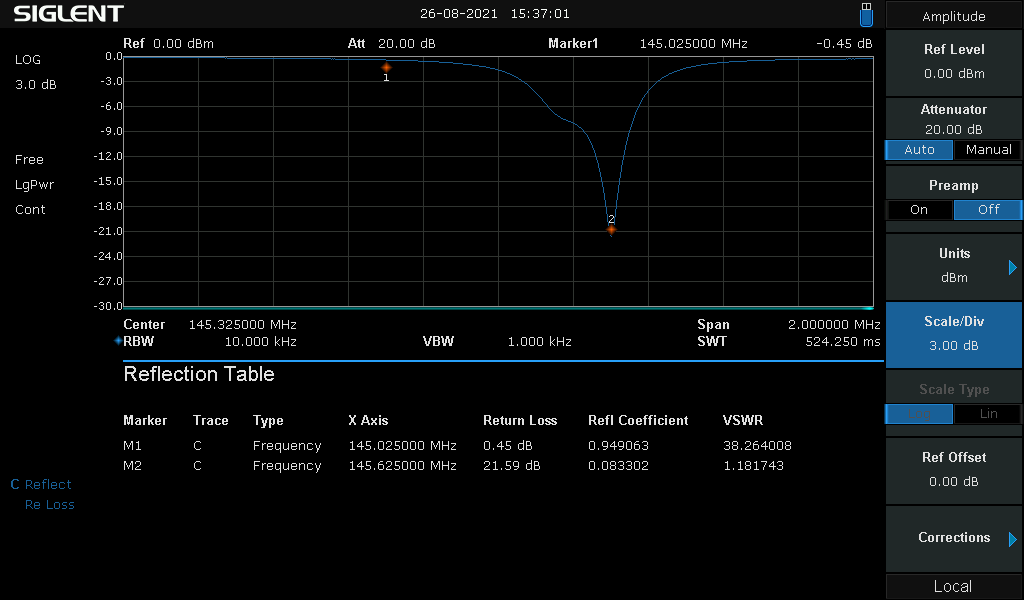 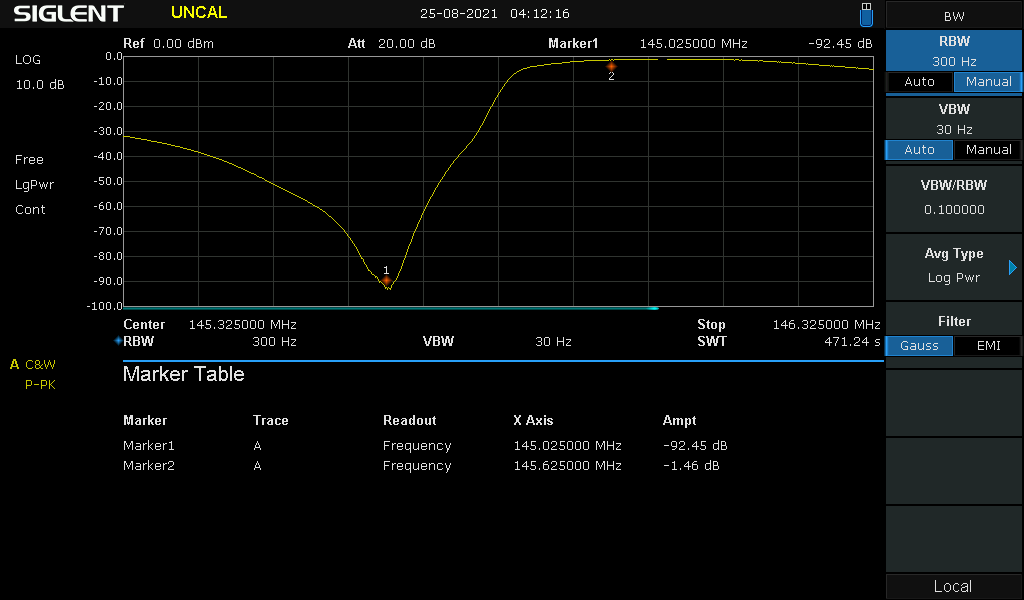 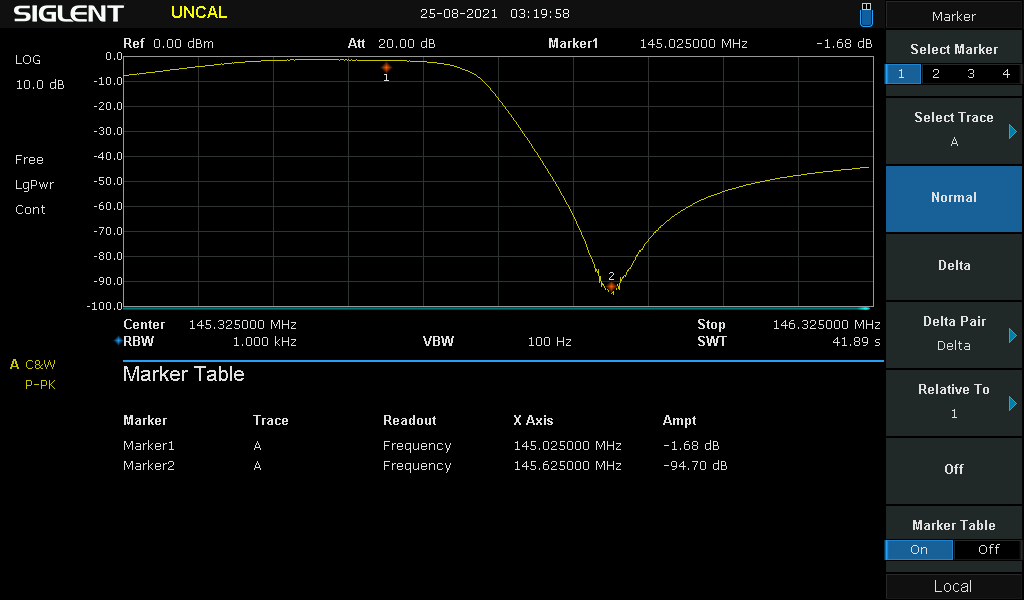 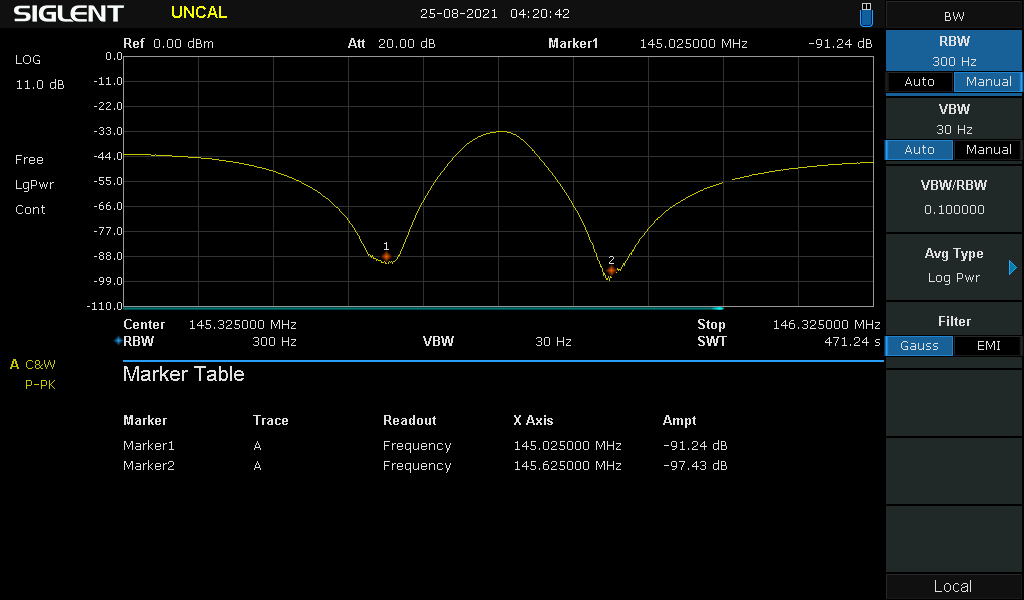 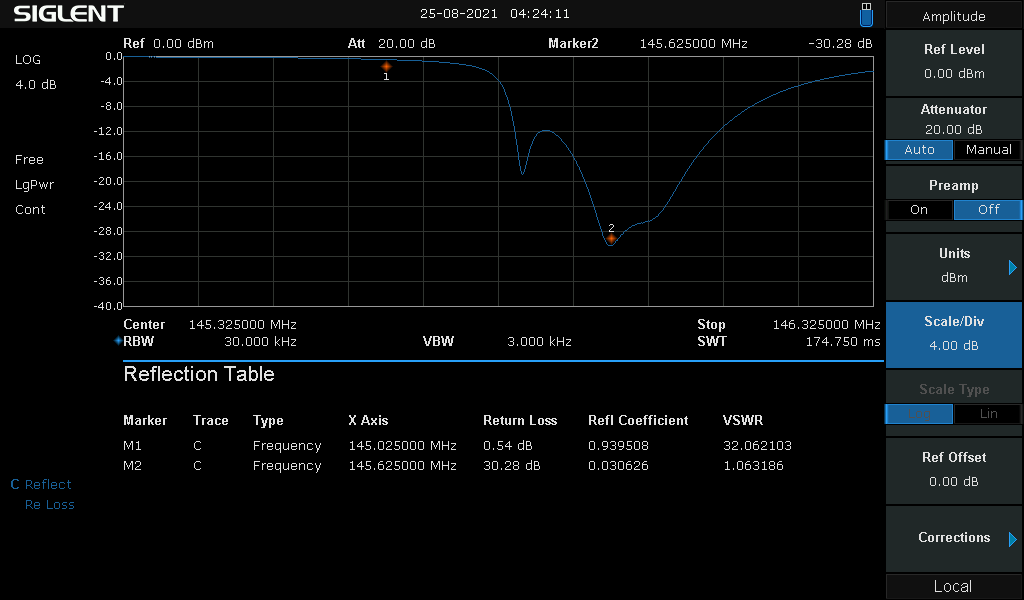 1. With a T-connector, tune individual cavities. This can be done with the complete harness in place but only one of the two or three cavities connected at one time for tuning. Doing so saves an extra step (#5).

2. Set the scope center frequency to the pass frequency and set a marker on it. On the pass frequency, adjust rod until insertion loss is minimal. To do this with great accuracy, zoom in with a 200kHz SPAN and high gain. Use the readout value rather than visually looking for a peak as that is unreliable. (This step of setting the pass point can be done using an SWR reflection bridge and setting for the lowest SWR possible. It appears that the SWR method makes it easier to pinpoint the peak. In theory the two should yield very similar answers.)

5. Connect the cavities individually, one at a time. Use the rod to move the notch to the reject frequency. Once again, this needs to be done with high resolution so use the settings in step #3. Do this for all the cavities, one at a time.

6. Connect all the cavities to the harness. If everything is done correctly, at this point, everything should just align without needing further adjustment.
Top 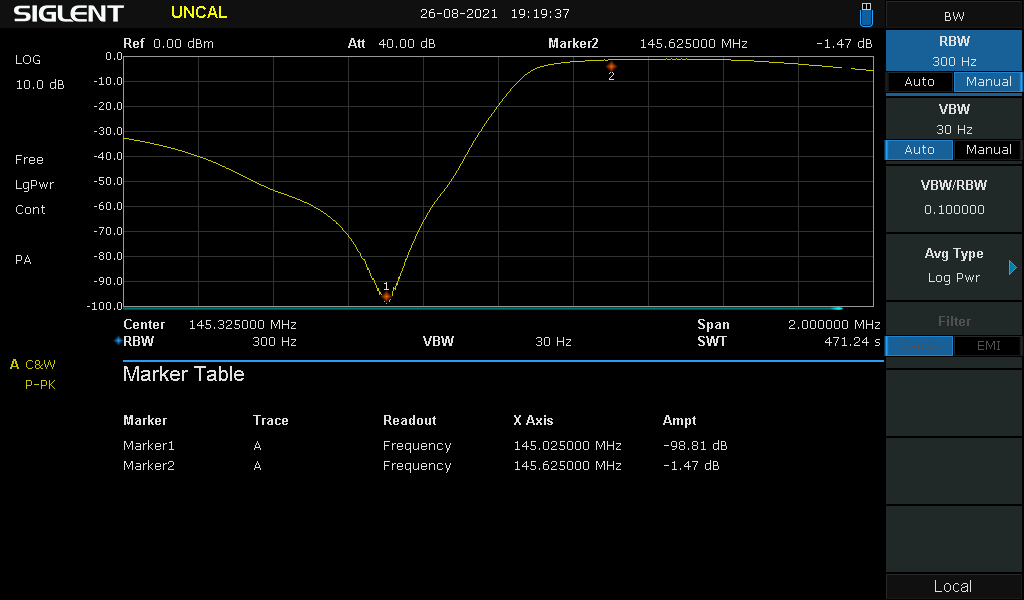 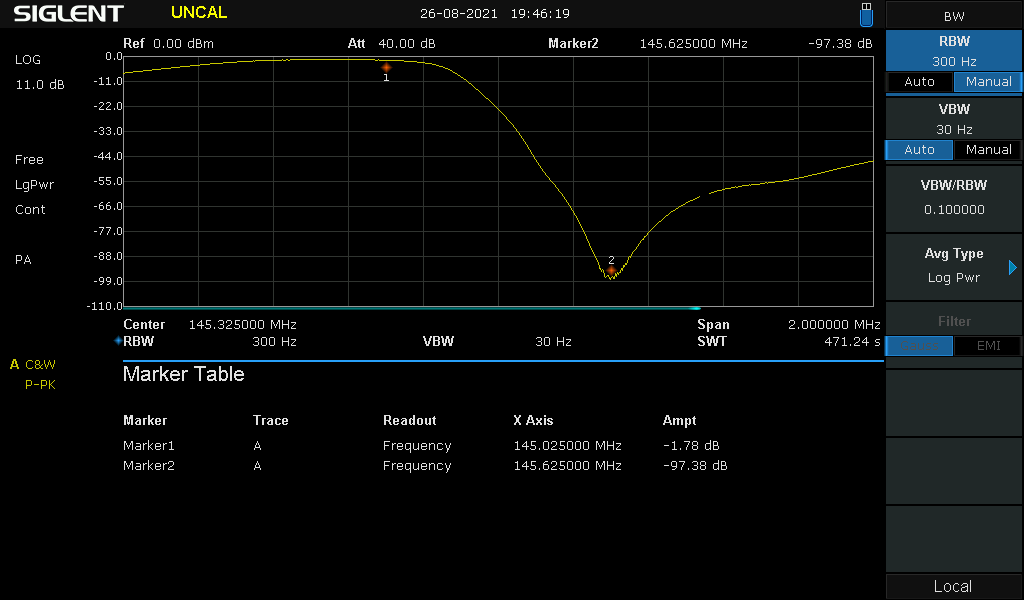 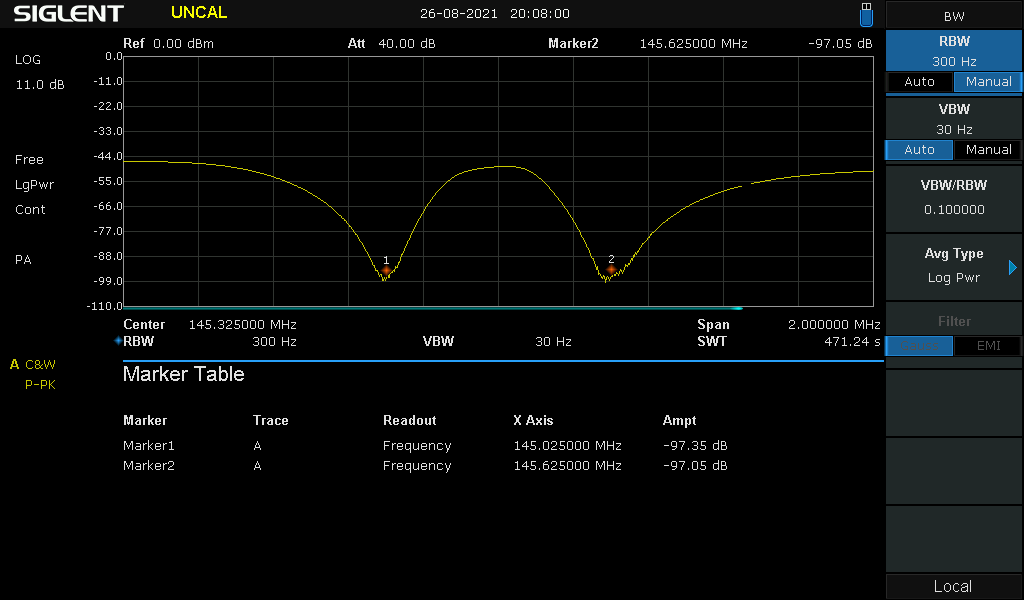 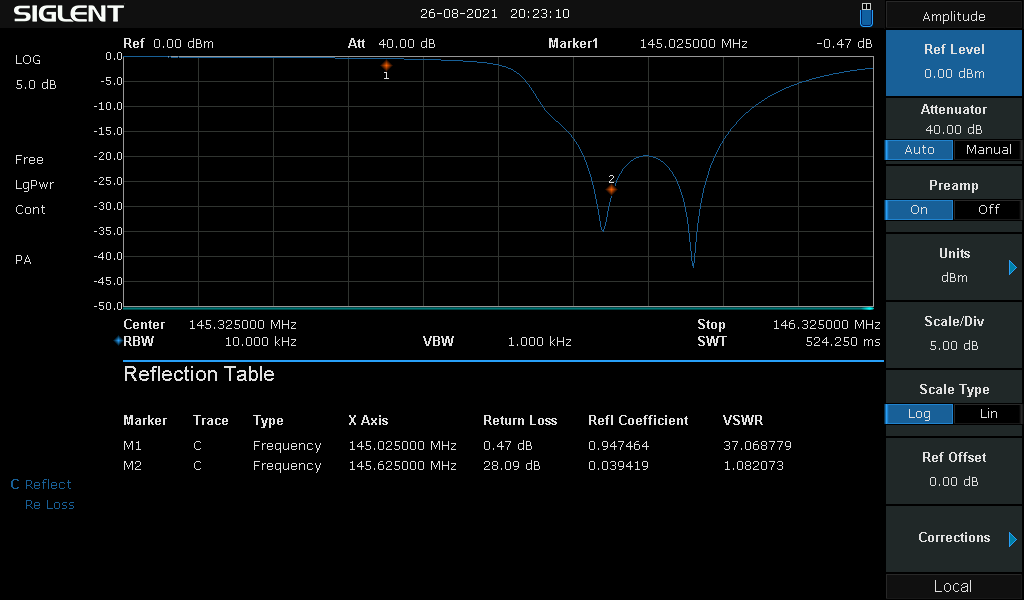 We now have the Motorola SLR-5300 installed and working. Cavities are tuned. Currently using the Yagi antenna on the upper balcony with SWR of about 1:1.4 measured at the TX port of the cavity. The radio does not overheat, nor drift appreciably in frequency with heavy usage. As the repeater now comes with its own PSU, the external PSU is no longer needed. The cables between the repeater and the cavity have also been changed and now use Belden 7806A cables. 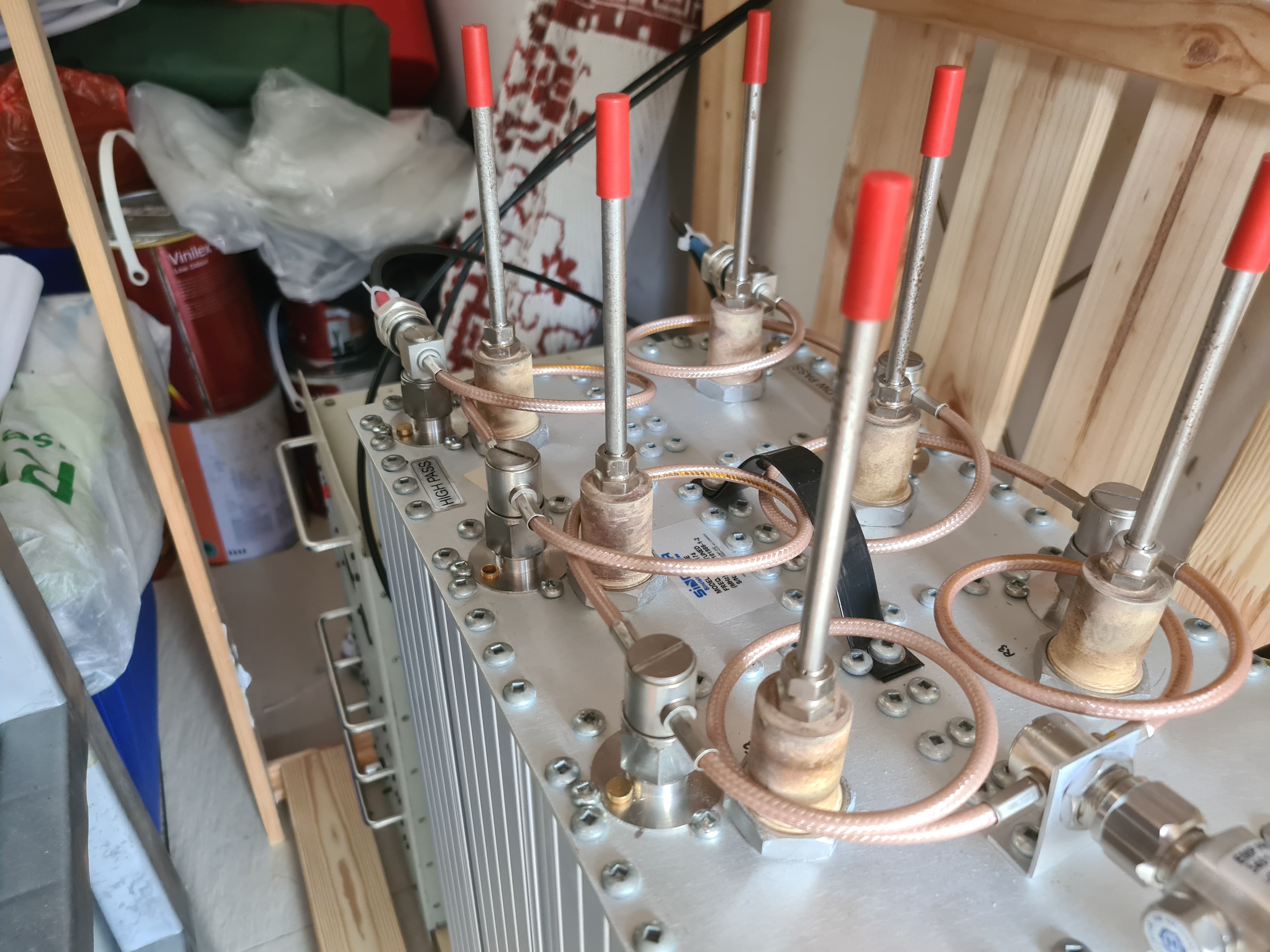 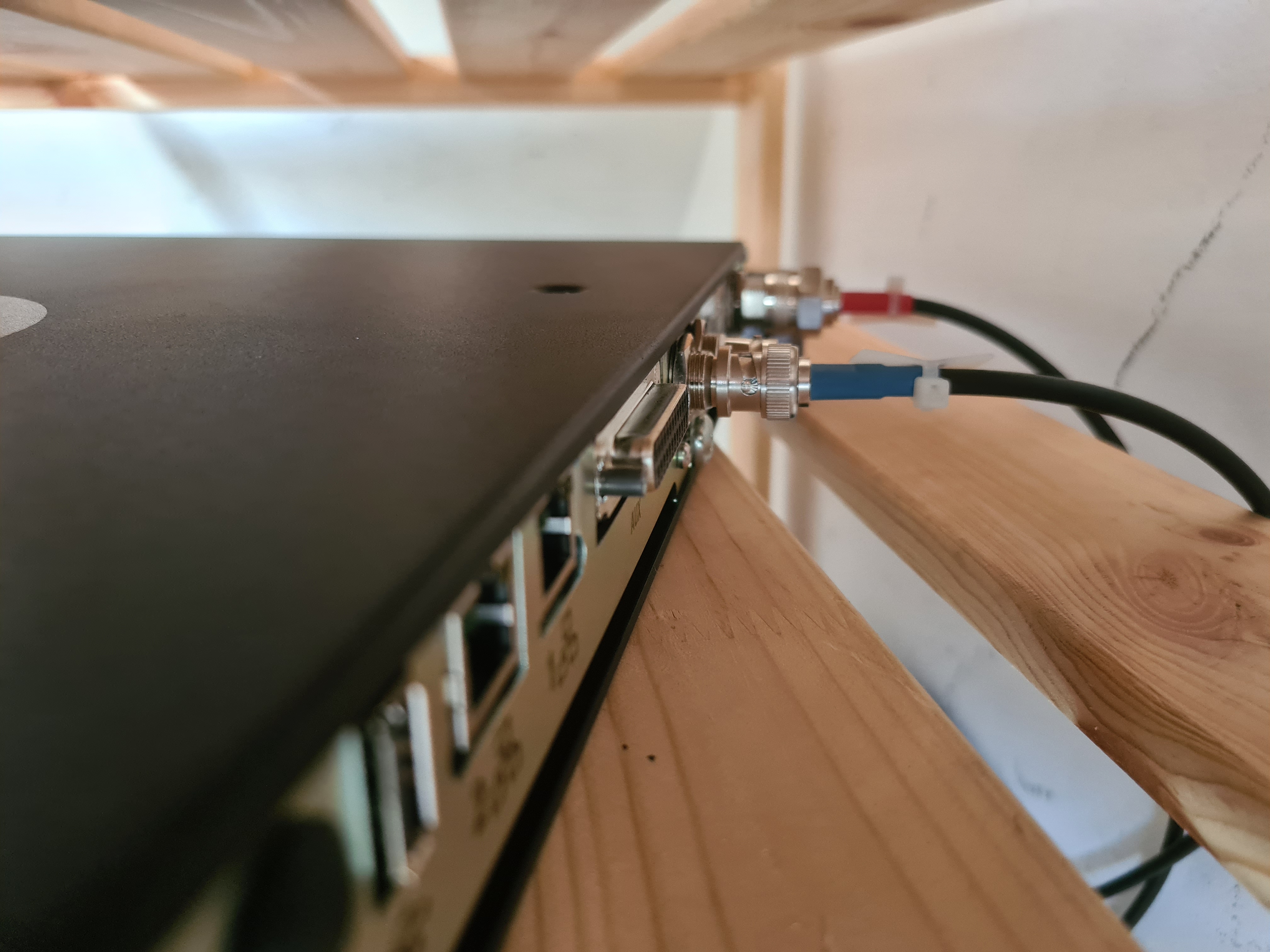 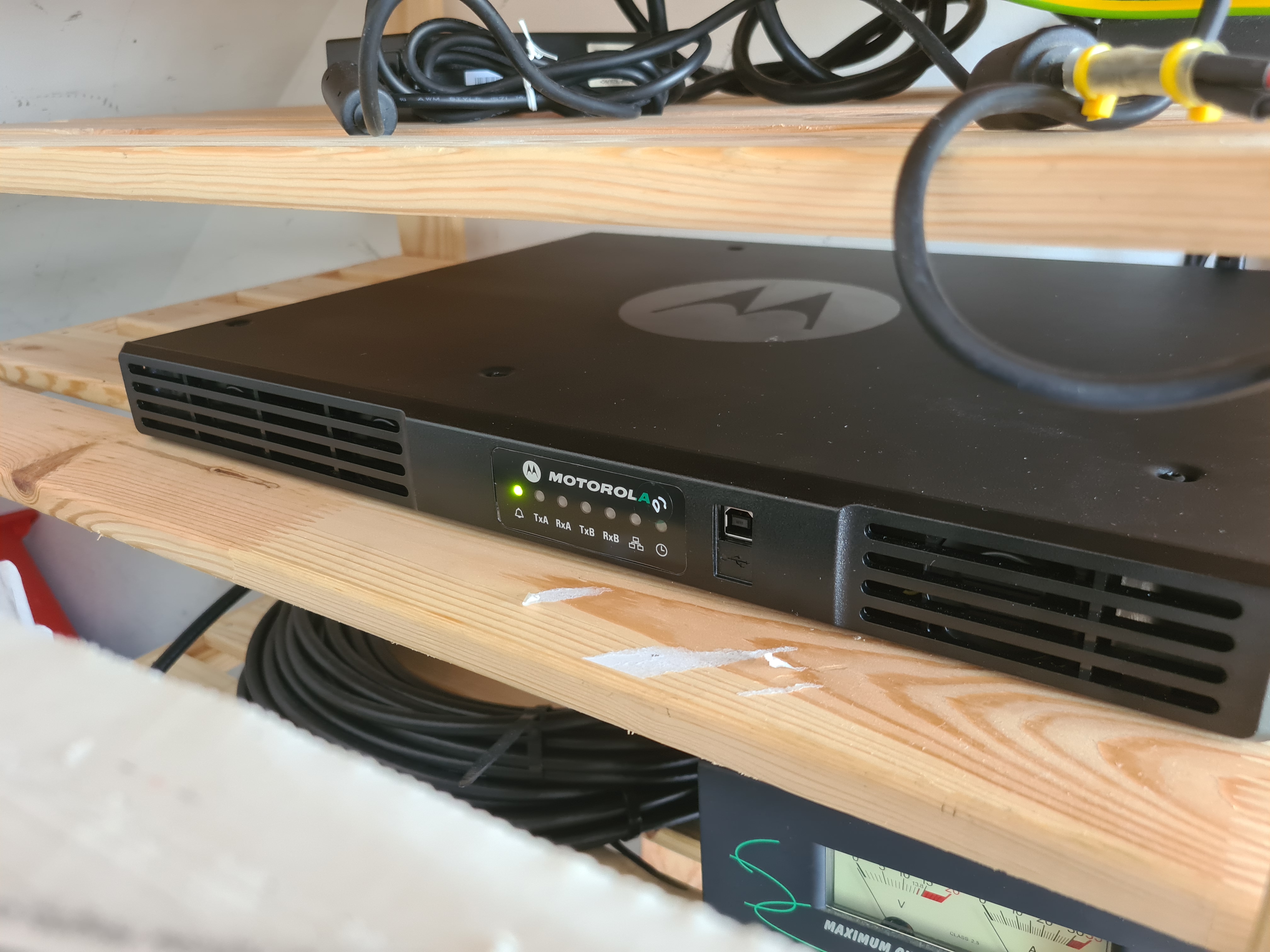 The current setting for the repeater:-

The plan is to get the license for the CPS software so that we can adjust these values. This requires a license key and is tied to the laptop on which the software is installed.

Furthermore, we seem to be experiencing occasional QRM that occurs mostly at night. The QRM does not appear to key up the repeater (due to the CTCSS) but can be heard when the repeater is keyed up. It overpowers weaker signals. The plan is to:-

1. Install a monitoring receiver at the repeater site
2. Place a spectrum analyzer at the site for the same purpose

Additional work to be done:-

1. Install a Diamond X200 VHF/UHF vertical and do A-B comparisons with the yagi.
2. Re-program the repeater for a longer ToT duration (5m or 7m)
3. Possibly increase output power to 35W to account for the 1.5dB insertion loss through the cavity
4. Possibly put repeater into dual-mode

To do this, currently:-

Separately - LMX2352TM/NOPB is on order from Icom for the possible repair of the ICFR-5000. This is due sometime in October.
Top

The Motorola CPS 2.0 software is used to program the repeater profile but an RNDIS driver is required before Windows 10 recognizes the USB port as a network device.